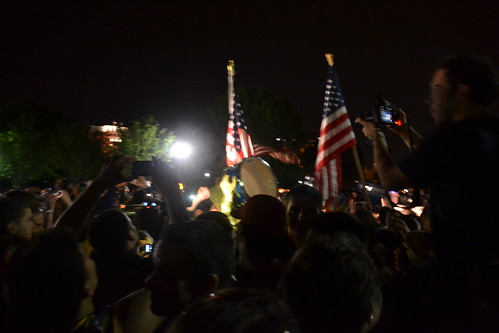 The idea that the United States has a problem with war propaganda is typically scratched in a bad-apples manner with a story that the U.S. has set up a new propaganda agency, such as the Global Engagement Center, or hired a company, such as the Lincoln Group, to plant articles in foreign media. Or we'll read a report that former generals are secretly picking up their talking points from the Pentagon and their income from weapons companies while appearing as objective commenters on television. Or occasionally we'll hear the recognition that some particularly obvious or disproven set of lies (such as those regarding Iraq in 2003) were the result of a well-meaning slip-up.

But how do we explain the failure of any significant section of the population in the foreign country involved to start believing the planted articles? The U.S. public would have believed them. They were printed in the newspaper and looked completely official. How do we explain that the former generals quietly on the take are indistinguishable from any of the other "experts" discussing foreign affairs on CNN? If those bribed to promote war sound just like everyone else, is the bribery the primary problem? How do we come to terms with President George W. Bush's pre-war proposal to Tony Blair that they paint a plane with UN colors and fly it low hoping to get it shot at, or his post-war remark that it really didn't matter if any of the claims made about Saddam Hussein were true or not? If that's a well-meaning slip-up, what does all-out malevolence look like?

When the Rendon Group manufactured the story of the heroic rescue of Jessica Lynch, it looked just like all the Hollywood movies made in collaboration with the Pentagon, and also just about like virtually all of the Hollywood movies made without any such input. When Donald Trump threatens to bomb some more people, the "journalists" who fall in love with him are falling for adherence to a familiar, expected, and accepted role.

Could it be that we need a 12-step program that begins with the recognition of a deeply entrenched problem, minus the 7 steps that amount to relying on a deity to clean up our mess?

I think so. I think belief in war lies is an addiction, and that those who get hooked do so not so much because of the quality of the lies as because of a predisposition to believe them. War lies have been around for millennia. I wrote a book categorizing them, called War Is A Lie. But why did Colin Powell's package of war lies at the United Nations look like such obvious fakery to much of the world and appear so solemn and convincing to so many in the United States? War propaganda's success is not primarily determined by the quality of the propaganda, any more than drug addiction rates are determined principally by the quality of the drugs available. Rather, as logic and scientific studies bear out, basic attitudes produced by fundamental educational practices predispose people to believe or not believe in war lies.

Let's begin with the obvious. Belief in the justification of a war is quite openly irrational. Unlike other questions of belief, on which people urge us to consider facts, with war we are quite often urged to believe as a matter of duty, obedience, patriotism, and citizenship. Promoters of war lies shamelessly appeal to any existing tendency to believe on command. An insistence on reviewing the facts of the matter is often characterized as support for a designated enemy in the desired war. Asking for evidence that Syria used chemical weapons or Russia attacked Ukraine or Libya threatened a massacre is not met with a presentation of evidence so often as with an accusation of believing that the Syrian, Russian, or Libyan government is a saintly manifestation of heaven that should be assisted in its longstanding goal of slaughtering every U.S. citizen.

When someone accused the coffee corporation Starbucks of not supporting a war, the company went to great lengths to prove that it supported "the troops" and to conflate that with supporting the war, without ever mentioning the slightest justification for or benefit from the war. As thoughtless participation is expected of members of the military, thoughtless war support is the duty of any business not wishing to face the wrath of the warmongers. Asked why it had a coffee shop at the U.S. torture camp at Guantanamo, Starbucks replied that not to have one there would constitute a political statement.

Further evidence that belief in war lies is generally irrational is found in the total disregard by war makers and war supporters for consequences, the desire to blow things up for the sake of blowing them up. A humanitarian war, if such a thing existed, would consider the human costs of the war and calculate how they might be outweighed by some imagined human benefit of the war. Instead, even knowing the costs of a war is widely considered to constitute a demand to end the war and opposition to ever having started it. "We don't do body counts!" explained General Tommy Franks.

A rational decision to drop a giant bomb on Afghanistan would be part of some sort of plan to accomplish something or other beyond purely dropping the bomb. When Hillary Clinton laughed about having killed Muamar Gadaffi, she wasn't expressing some rational decision of necessary evil for the greater good, but an irrational urge -- and the consequences for the people of Libya and the world be damned. When Madeleine Albright claimed killing a half-million children was "worth it" she clearly meant that anything at all was "worth it," not that she'd figured out a way to save 500,001 or more kids by killing 500,000 of them. When Donald Trump proposes to kill more families, it is not because there exists any evidence of anything humanitarian or even profitable resulting from such action. The point is purely and simply to kill more families, or at least to start speaking more about all the families being killed.

War lies are not only accepted as a matter of duty, but identified with as a matter of pride in a conception of one's self. Freedom isn't free, these colors do not run, I support the troops, and this brain will not tolerate opposition to mass murder when that sacred crime is committed by the U.S. military. Remember that believers in Iraq WMDs were shown evidence to the contrary, and as a result strengthened rather than weakened their beliefs in the WMDs. Rationality was not at work here, rather identity -- and faith.

A further hurdle for any claim that war justifications can be rationally argued for, or that they are accepted on their own merits, lies in the fact that the claims made regarding atrocities or weapons possession are typically completely irrelevant to any legal, moral, or practical case for the war advocated. If every lie about Iraq or Libya or Syria had been perfectly true, there would have been zero justification for those wars. The United States possesses WMDs, commits atrocities, and uses weapons most of the world has banned or shunned, none of which would justify anyone in bombing the United States. Nor would bombing the United States do any good for anyone living in the United States. (And yet war opponents go on focusing on doubts that the Syrian government really used chemical weapons, rather than opposing the supreme crime of launching war, a crime whose illegality and immorality remain untouched by anyone having used or not used chemical weapons.)

Then there is the problem of acceptance of carefully selected partial and ahistorical information. If your kid comes home from school, your wonderful noble and beloved child, and says "Michael jumped on me and hit me and called me names," you are likely to ask, without yet drawing any conclusions: "What started that? Did you do anything to make him mad at you?" It's a logical, almost inevitable question. It doesn't rely on acceptance of Michael's violence. It doesn't assign blame or innocence. It just suggests that the universe is often comprehensible, that effects often have identifiable causes. But when North Korea builds a nuclear weapon or test fires a missile, it is almost a patriotic duty in the United States to banish from one's mind any question of context.

Certainly we can blame the U.S. propaganda system for its careful omission of context and selection of news. That North Korea complied with an agreement to halt its nuclear weapons program until U.S. President George W. Bush tossed that agreement out and declared North Korea part of an axis of evil, and destroyed another member of that axis, might have been missed because you were shopping at the time or because U.S. media outlets were focused on the exciting destruction of Iraq. That North Korea has repeatedly proposed to halt its nuke program if the U.S. and South Korea will stop practicing to bomb the North hasn't been widely reported. What the U.S. did to North Korea during the Korean War or that the war has never been officially ended or that the U.S. has been building up all kinds of weaponry in South Korea that North Korea and China see as threatening may be easy to miss. But not to even ask is inexcusable. The U.S. tests missiles all the time. Yet when North Korea tests a missile the U.S. media loses its collective mind. Why not ask for an explanation of the double standard? Why not ask what motivated, rightly or wrongly, North Korea to commit such an outrage? Not to ask is to want to not know.

David Swanson is the author of "When the World Outlawed War," "War Is A Lie" and "Daybreak: Undoing the Imperial Presidency and Forming a More Perfect Union." He blogs at http://davidswanson.org and http://warisacrime.org and works for the online (more...)
Related Topic(s): Bombing; Lies; Peace; Peace; Propaganda; Syria; Wars, Add Tags
Add to My Group(s)
Go To Commenting
The views expressed herein are the sole responsibility of the author and do not necessarily reflect those of this website or its editors.