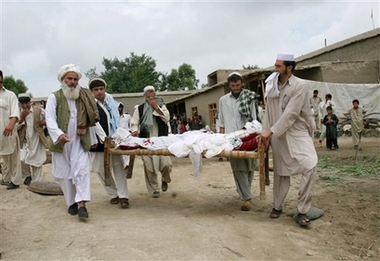 "Most people want security in this world, not liberty." H.L. Mencken

"The more there are riots, the more repressive action will take place, and the more we face the danger of a right-wing takeover and eventually a fascist society." Martin Luther King, Jr.

"The soldier does not wish to appear a coward, disloyal, or un-American. The situation has been so defined that he can see himself as patriotic, courageous, and manly only through compliance." Stanley Milgram

An assortment of American military, security contractors from the U.S., and Afghani security and police organizations that likely answer to U.S. military leaders engage in war on a daily basis and, as Anand Gopal recently detailed, are subject to targeted assassinations, night raids, secret detention centers, disappearances, and other acts of "counterterror."

Many Americans have heard stories seep into corporate media's news coverage of the Afghanistan War (or, in general, the "war on terror"). Americans know detention has been a common tool used against "terror suspects" and that certain "suspects" have in many cases been held secretly.

Who knows how many Americans are aware of disappearances which terrify a population along with targeted assassinations that come from foreign military or security forces that are seeking to enforce "counterterror" measures.

Targeted assassinations are to be expected in any war from any invader seeking to control a country. And, America has perfected the art of detaining civilians or "suspects" for indefinite detention. But, what about the night raids on Afghanis that have come into focus in the past few months? What purpose do the raids serve?

What information do we have on these night raids and just how similar are the raids to similar tactics used by repressive police forces in history?

Kevin Gosztola is managing editor of Shadowproof Press. He also produces and co-hosts the weekly podcast, "Unauthorized Disclosure." He was an editor for OpEdNews.com
Related Topic(s): Afghanistan War; Assassination; Bernard Kerik; Blackwater; Corporations Mercenaries-Security; Fear; History; Human Rights; Military; NATO; (more...) Obama Administration; Occupation; Security; Taliban; Terrorism; War On Terror, Add Tags  (less...)
Add to My Group(s)
Go To Commenting
The views expressed herein are the sole responsibility of the author and do not necessarily reflect those of this website or its editors.