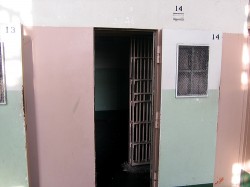 For years,four British nationals have been fighting against their extradition to the United States to face various terrorism charges,arguing that such a move would place them at risk of human right violations, as defined by the 1950 European Convention on Human Rights. When courts in the UK ruled against the four men, they took their cause to the European Court of Human Rights in Strasbourg.

Among other things, the British suspects have argued that if extradited, theycouldface a lifetime of solitary confinement under "special administrative measures" (SAMs), most likely at ADXFlorence, the notorious federal supermax prison in Colorado. Such confinement, they contend,would violate Article 3 of the European Convention on Human Rights, which states: "No one shall be subjected to torture or to inhuman or degrading treatment or punishment."

The UKsought to have the suspects'complaint dismissed. But today, the European Court of Human Rights "declared admissible" the portions of the complaint dealing with supermax conditions, as well as withlife sentences without the possibility of parole.

A press release issued earlier today bythe Registrar of the European Court summarized the case (Babar Ahmad and Others v. the United Kingdom) this way:

The applicants alleged in particular that, despite the diplomatic assurances provided by the United States, they were at risk, if extradited, of being subjected to an unfair trialdue to the use of evidence obtained through torture and/or of coercive plea bargainingat the conclusion of which they could be designated as enemy combatants. They also alleged that, once extradited, they were at risk of extraordinary rendition and life imprisonment without parole and/or extremely long sentences in a "supermax" prison such as ADX Florence where special administrative measures would be applied to them. They relied on Articles2 (right to life), 3 (prohibition of inhuman or degrading treatment), 5 (right to liberty and security), 6 (right to a fair trial),8 (right to respect for private and family life) and 14 (prohibition of discrimination).

Based on promises made by the United States, the Courtruled thatif extradited, the British suspects would not be at risk of extraordinary rendition, of being tried as enemy combatants, or of unfair trials or discrimination. It had also received assurances that the suspectswould not face the death penalty. When it came toconfinement for life in Florence ADX, however, the Court found a crediblecase couldmight be made that such punishment would violate the European Convention. The Court requested further briefing on a number of questions, including the following, before it issues its final ruling:

The four British terrorism suspects are represented by the firm of renowned British human rights lawyer Gareth Peirce (who wrote about the case here). The information presented to the European Court on Human Rightson their behalfreads like a rundown of evidence for the torturous nature of solitary confinement in general, and lockdown at ADX Florence in particular.Following are the relevant paragraphs from the Court's decision.

90. The applicants relied on a series of newspaper articles on ADX Florence, including a Time magazine article of 5 November 2006 described spartan cells and almost no contact between prisoners and other people, since food, mail and laundry were passed through a slot in the cell door. Prisoners were strip-searched before they were allowed to exercise. There were also staff shortages which caused irregular meal times, reduced telephone calls and exercise time. A television interview with a former warden also described frequent force-feeding as a result of hunger strikes by prisoners in protest at their conditions.

91. The applicants also provided a report by a psychiatrist, Dr Terry Kupers, which had been prepared specifically for the present proceedings. He considered that a supermax prison regime did not amount to sensory deprivation but there was an almost total lack of meaningful human communication. This tended to induce a range of psychological symptoms ranging from panic to psychosis and emotional breakdown. All studies into the effects of supermax detention had found such symptoms after sixty days' detention. Once such symptoms presented, it was not sufficient to return someone to normal prison conditions in order to remedy them. If supermax detention were imposed for an indeterminate period it also led to chronic despair. Approximately half of suicides in prison involved the 6-8% of prisoners held in such conditions. The effects of supermax conditions were worse for someone with pre-existing mental health problems. Dr Kuper's conclusions were supported by a number of journal articles by psychologists and criminologists, which the applicants provided.

92. The applicants also provided a copy of the Istanbul statement on the use and effects of solitary confinement, which was adopted at the International Psychological Trauma Symposium in December 2007. Its participants included the United Nations Special Rapporteur on Torture. The statement included the following on the effects of solitary confinement:

"it has been convincingly documented on numerous occasions that solitary confinement may cause serious psychological and sometimes physiological ill effects. Research suggests that between one-third and as many as 90 per cent of prisoners experience adverse symptoms in solitary confinement. A long list of symptoms ranging from insomnia and confusion to hallucinations and psychosis has been documented. Negative health effects can occur after only a few days in solitary confinement, and the health risks rise with each additional day spent in such conditions.

Individuals may react to solitary confinement differently. Still. a significant number of individuals will experience serious health problems regardless of the specific conditions, regardless of lime and place, and regardless of pre-existing personal factors. The central harmful feature of solitary confinement is that it reduces meaningful social contacttoa level of social and psychological stimulusthat many will experience as insufficient to sustain health and well-being.

The use of solitary confinement in remand prisons carries with it another harmful dimension since the detrimental effects will often create a de facto situation of psychological pressure which can influence the pretrial detainees lo plead guilty. When the element of psychological pressure is used on purpose as part of isolation regimes such practices become coercive and can amount to torture."

93. The applicants also submitted a report from the Civil Rights Clinic at the University of Denver, which had acted for a number of prisoners at ADXFlorence. The report noted that conditions were even more severe for those prisoners who were subjected to special administrative measures. For example, such prisoners could only communicate with his "attorneyof record". This made it impossible to contact an attorney to request representation to challenge special administrative measures. Requests made directly to the court to have an attorney appointed were denied. There had been no successful challenges to designationto ADXFlorence and challenges could only succeed where confinement in supermax affected the prisoner's date of release or where he was severely mentally ill. The report accepted that the step-down programme could take a minimum of three years but prisoners could be removed from it and returned to "general population" if they were found guilty of misconduct or for "administrative reasons". The report highlighted the cases of several Muslim prisoners who had fulfilled all of the criteria for admission to the step-down programme except for the requirement that the original reasons for placement at ADXFlorence be "sufficiently mitigated". However, several prisoners had only been transferred from lower security prisons to ADXFlorence after11 September 2001 (despite no evidence of their involvement in the attacks) and thus it was difficult for them to demonstrate that the reason for their placement had been mitigated. Two Muslim clients of the Civil Rights Center had spent respectively five and ten years in general population units but had not been admitted to the step-down programme. Another had spent five years in a general population unit and had only been admitted after retaining the Center in a lawsuit.

94. Both the applicants and Government made reference to a letter dated 2 May 2007 from Human Rights Watch to the Director of the Federal Bureau of Prisons which followed a tour the organisationhad been given of ADXFlorence. The letter expressed concerns that a number of prisoners convicted of terrorism offences had been sent to the prison based on the nature of their crimes and, despite good conduct since their arrival, had remained in general population units and thus outside the step-down programme for up to nine years. The letter made suggestions for improvement in respect of recreation, mail, telephone use, the library. It also noted that progress was to be made on better meeting prisoners' religious needs, such as the provision of a full-timeimam and commended the educational programmes available through the prison's television system. The letter urged the prison authorities to investigate reports of retaliation against prisoners who were on hunger strike in the form of transfer to harsher cells. The letter also said that Human Rights Watch was extremely concerned about the effects of long-term isolation and highly limited exercise on the mental health of prisoners and criticised reports of rushed consultations between prisoners and psychologists, as well as the fact that evaluations were carried out via closed circuit television.

Over 40 years ago in Louisiana, 3 young black men were silenced for trying to expose continued segregation, systematic corruption, and horrific abuse in the biggest prison in the US, an 18,000-acre former slave plantation called Angola. In 1972 and (more...)
Related Topic(s): Court Decision; European Union; Human Rights; Humanitarian; Prison Industrial Complex; Prison Nation; Prison Violence; Prison-Prisoners; Prisoner Abuse; Prisoners; (more...) Prisons - Penal System; Torture, Add Tags  (less...)
Add to My Group(s)
Go To Commenting
The views expressed herein are the sole responsibility of the author and do not necessarily reflect those of this website or its editors.