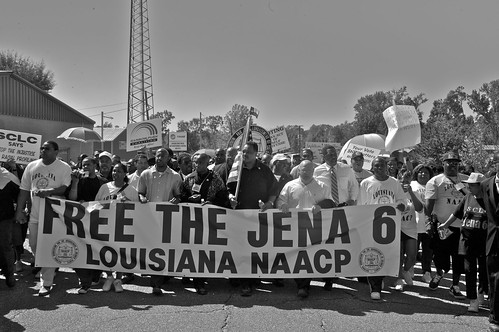 For many activists and organizers for social justice, the media aspect of organizing has typically meant having a good list of press contacts and aiming to get your action or story into a major local or national news outlet so that your group or organization can achieve its goals. It has typically meant conducting a press conference and expecting the media to show up and hear what has to be said.

How many have considered the prospect of being their own media and conducting their own investigative journalism to bolster their group or organization's efforts to meet their objectives or create real and lasting change?

Jordan Flaherty, a community organizer and journalist based in New Orleans who is the editor of Left Turn magazine, will be attending and participating in the U.S. Social Forum in Detroit next week. He and other journalists will be coming together to put on a workshop called, "Grassroots Media and Movements for Justice," and share their insight into how investigative journalism can benefit social movements.

He elaborates on this idea, "If you look back at the history of this country, here in New Orlerans, where I live, there are a lot of civil rights movement organizers and they talk about during their civil rights movement there was basically just three main organizations everyone on the left in the U.S. was a part of. [They were] part of SNCC, part of CORE, part of SDS and you know this non-profit industrial complex came out and many people said that led to dissolution of our movement."

Flaherty suggests that "single-issue campaigns" disconnected people. What he hopes will happen with the Forum is that "different movements and different community organizations [will now] come together and build a united movement against the common threats of the world whether that's militarization or corporatization or people before profits not profits before people."

Flaherty was the first journalist to bring the Jena 6 struggle to a national audience. He wrote a story for The Indypendent, a newspaper run by Indymedia out of New York. That newspaper and then two African-American newspapers, Louisiana Weekly and Louisiana Data News Weekly, covered the story. It was the work of non-corporate, independent news media that kept this story alive.

Kevin Gosztola is managing editor of Shadowproof Press. He also produces and co-hosts the weekly podcast, "Unauthorized Disclosure." He was an editor for OpEdNews.com
Related Topic(s): Activism; Community; Hurricane Katrina; Injustice; Jena Six 6; Journalism; Justice; Katrina; Media; Organizing; (more...) Police; Social Justice; Story; Us Social Forum; Ussf 2010, Add Tags  (less...)
Add to My Group(s)
Go To Commenting
The views expressed herein are the sole responsibility of the author and do not necessarily reflect those of this website or its editors.