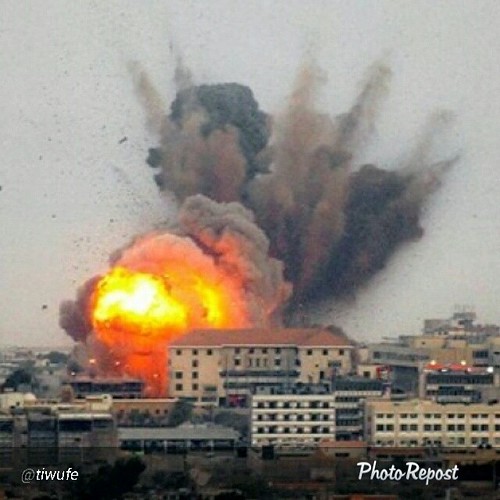 The International Committee of the Red Cross and InterAction (a coalition of U.S. human rights groups) have published a report on how to protect civilians when waging war on cities. They seek to catalog the "humanitarian challenges specific to urban warfare."

While I would not (one wishes it were needless to say) prefer that they strive to maximize the human destruction possible in urban warfare, I want to note that any report seeking to address the humanitarian challenges specific to slavery or rape or child abuse or the slaughter of kittens (rather than humans) would be dismissed with outrage. Nowhere do these human rights advocates hint at the possibility of ceasing to bomb cities. Nowhere do they recognize the illegality of all recent U.S. bombings of cities under the U.N. Charter or, for that matter, the Kellogg-Briand Pact. Instead, the authors treat the practice of bombing cities as inevitable and natural, and attribute the growth of urban warfare to the migration of people from rural to urban areas.

What should be done? While the authors discuss various types of massive slaughter and destruction as "intended or not," they also suggest that the key reform to be sought is better intentions and more careful planning. The "development" types should work better with the "humanitarians," provide more "flexible" funding for the human rights groups, and do "proportionality analysis," we're told.

The word "proportionality" appears in every Just War theory and in thousands of mainstream news reports, yet nobody, including these authors, has ever devised a test whereby one can determine whether a war or a particular bombing was "proportional" or not. If I say killing 14 children in order to kill a particular man was disproportional, what's to stop someone else arguing that this particular man needed to be killed to an extent that would have justified killing anywhere up to 16.37 children? Of course, I can point out that most wars kill mostly civilians, so that launching them is an act that guarantees great injustice, but I can't stop someone else claiming that "proportionally" killing 500,000 children is "worth it" in the context of some just cause (as then U.S. Secretary of State Madeleine Albright once claimed).

The most serious recommendation that these authors make is that no more large bombs, only small bombs, be dropped on cities, with the large bombs saved for rural areas. It's worth noting that the U.S. government is developing "more usable" nuclear bombs and tends to ignore such restrictions, that small bombs like large bombs still commit mass-murder while endangering us and costing a fortune and poisoning the environment, that a number of small bombs adds up to a large bomb, and that large bombs in rural areas do all of the same destructive things even if hitting fewer people and less centralized infrastructure.

The most disturbing recommendations in this report include creating safe exit routes (even while claiming people should have the right not to leave), moving schools and hospitals underground, avoiding ground floor windows, and taking up arms and developing local militias.

This report is the product of a human rights industry feeding off its total acceptance of war and violence. When you can bring yourself to the point of making these recommendations to the people your government is bombing, but you cannot ever bring yourself to the point of even hinting at the possibility that your government should stop bombing people all over the world, you've become an Orwellian ministry of human rights, not an actual movement to expand the well-being of humans.

David Swanson is the author of "When the World Outlawed War," "War Is A Lie" and "Daybreak: Undoing the Imperial Presidency and Forming a More Perfect Union." He blogs at http://davidswanson.org and http://warisacrime.org and works for the online (more...)
Related Topic(s): Bombing; Bombing Hospital; Rights Denied, Add Tags
Add to My Group(s)
Go To Commenting
The views expressed herein are the sole responsibility of the author and do not necessarily reflect those of this website or its editors.