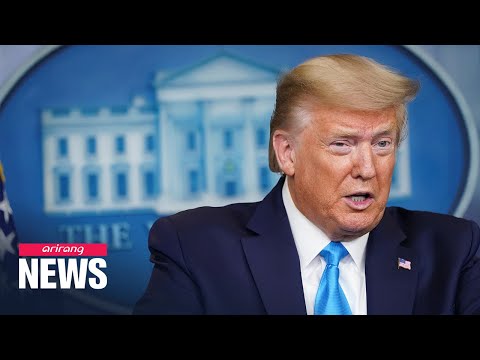 China's communist leaders have blood on their hands, so say U.S. hawks. Chinaphobes in Congress and a battalion of media pundits are demanding compensation from Beijing for the spiraling death toll and economic destruction incurred by the United States.

Already U.S. states have begun litigation to sue China. Rightwing think-tanks like the Hudson Institute are projecting that China is liable to pay out trillions of dollars for American losses over the Covid-19 pandemic.

The chorus of "Yellow Peril" fever goes beyond financial retribution right up to creating a casus belli against China. It is no coincidence that U.S. warships have stepped up provocative maneuvers in the South China Sea this week.

President Donald Trump and his top envoy Mike Pompeo have weighed in to point the finger at China for pandemic mayhem hitting the U.S. China is being set up as the scapegoat to "explain" why the supposedly most powerful nation in the world has been left so ravaged by a virus.

The "blame China" narrative turns on two sub-plots. It is claimed in U.S. media that the Chinese authorities knew a lot more than they let on they did about the potential harm from the epidemic when it first emerged in the city of Wuhan in December. The insinuation is that China (and the World Health Organization) engaged in a cover-up about the scale of the disease, thereby putting other nations in danger through misinformation.

The second sub-plot in the "blame China" agenda is that a Chinese virology laboratory leaked out the deadly virus, either by accident or as part of biowarfare program. That again implies a China cover-up. Both sub-plots fit the slogan taken up by Trump supporters and anti-China hawks more generally: "China Lied, People Died".

In both cases, however, it is more than plausible that the media agitation is information warfare to scapegoat China. What is happening here this: a disastrous current situation in America is being retrospectively "explained" with false U.S. intelligence claims that seek to shift blame on to China, and, crucially, distract from questions about inherent systematic failure in Washington.

On the "China knew more but didn't let on" claim, the primer for this theme came from an ABC report published on April 9. It quotes anonymous U.S. sources as saying that the Pentagon's disease experts were briefing the White House and senior national security officials about a new contagion sweeping through China's Wuhan region as far back as November.

As ABC reported with convenient sinister implication: "Those analyses said China's leadership knew the epidemic was out of control even as it kept such crucial information from foreign governments and public health agencies."

The basic problem is "those analyses" referred to by ABC's anonymous sources are only alleged to have happened. Where's the evidence, transcripts, memos and so on? An open mind should ask the question: was such an intel assessment even formulated?

ABC's report took off in the pundit-sphere even though it updated its report with a disclaimer from the Pentagon denying that any such assessment existed. Fair enough, maybe the Pentagon is mischievously disowning. There again, more likely, ABC is being played by its anonymous sources to concoct an anti-China narrative?

A few other contradictions are the following: Mark Esper, the Pentagon chief, subsequently told ABC in an interview that he didn't know anything about any such alleged contagion warning which he had supposedly received back in November or December. Esper's crack-handed tone suggests he simply did not receive any such briefing, rather than any sort of smart sophistry on his part.

Related Topic(s): Blame; China; China Politics; Corona Virus Coronavirus Covid-19; Intelligence; Trump, Add Tags
Add to My Group(s)
Go To Commenting
The views expressed herein are the sole responsibility of the author and do not necessarily reflect those of this website or its editors.