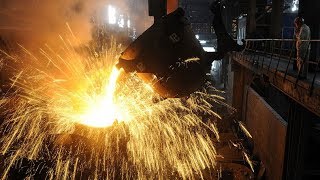 President Trump announced he would place tariffs of 25 percent on imported steel and 10 percent on imported aluminum. This followed investigations by the U.S. Commerce Department that determined unfairly traded imports of both metals have killed off American mills and jobs, threatening national security.

American aluminum and steel manufacturers and their workers have railed for decades against the trade regulation scofflaws that bankrupted U.S. mills and destroyed U.S. jobs. American manufacturers and workers are willing and able to compete on a level playing field. But countries like China deliberately distort that surface to their favor by defying trade rules.

China has conducted a trade war against the United States since the day in 2001 that the World Trade Organization granted the Asian giant membership. That's how the U.S. trade deficit with China has exploded , reaching a record $375.2 billion last year, a figure that represents more than half the total U.S. deficit.

The terrible result is economic war zones -- shuttered U.S. factories, furloughed manufacturing workers and devastated towns. University of Maryland economists Katharine Abraham and Melissa Kearney showed in recently published research that cheap Chinese imports rendered more Americans unemployed since 2001 than any other factor. The cost to U.S. workers was 2.65 million jobs. Automation also killed jobs , but by less than half of what Chinese trade cheating did.

The Commerce Department investigations into the effects of steel and aluminum imports on national security demonstrated that China flooded the international market with artificially cheap metals, depressing prices and annihilating American mills -- mills that are among the most efficient and least polluting in the world.

Steel employment in the United States has declined 35 percent since 2000. Aluminum jobs plummeted even further -- crashing down 58 percent in just three years, between 2013 and 2016. That amounts to tens of thousands of high-skill, family-supporting jobs lost.

The declines in U.S. steel and aluminum production occurred despite increased domestic demand for both.

American aluminum production sank even more sharply than steel. Over the past six years, six smelters permanently closed. Just five remain, with only two operating at full capacity. One of the five smelts the high-purity aluminum required for critical infrastructure and defense aerospace needs. If that mill closes too, the United States would have no domestic supplier of the metal crucial to national security. The only two other high-volume producers of this aluminum are located in the United Arab Emirates and China.

In 2016, the United States imported five times as much primary aluminum as it made. That year, it produced about half of what it did the year before. Production dropped even further in 2017.

Most of the aluminum imported into the United States comes from Canada, a country that respects trade regulations and operates a market economy, just like the United States. As a result, Canada should be exempted from the steel or aluminum tariffs.

China continues to produce steel and aluminum even when that means massive excesses. It dumps that glut on the international market, often at prices lower than production cost. All that government-subsidized, underpriced steel and aluminum forces producers outside of China to cut their prices. Too often that means they suffer losses, or go bankrupt.

Related Topic(s): China Politics; Imports; Jobs; Tariffs; Trade; Workers, Add Tags
Add to My Group(s)
Go To Commenting
The views expressed herein are the sole responsibility of the author and do not necessarily reflect those of this website or its editors.