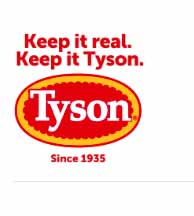 Even though 1,000 workers at Tyson's slaughterhouse in Waterloo, IA have tested positive for the coronavirus, it has reopened. Tyson has said last week it would begin slaughtering pigs.

The company promised that workers would receive daily screenings and access to nurse practitioners but many who can transmit the coronavirus are asymptomatic. At two other Tyson Iowa plants, 956 workers have tested positive. Meanwhile, "Millions of animals-- chickens, pigs and cattle-- will be depopulated because of the closure of our processing facilities," Tyson admits.

This is far from the first time Tyson, the world's second largest chicken, beef, and pork producer, has been in the news with food production scandals. Tyson had a sordid food production history before the coronavirus. Here is its rap sheet.

* In June of 2019, 36,420 pounds of Tyson chicken nuggets were recalled due to rubber contamination.

* In 2008, Tyson was caught injecting eggs with the dangerous antibiotic gentamicin, linked to serious side effects. The previous year the government disallowed the Tyson slogan "Raised Without Antibiotics," because the ionophores it adds to poultry feed are antibiotics.

* In 2004, an internal Tyson memo revealed that the wives of two veterinarians stationed at Tyson plants in Mexico had been receiving about $2,700 a month "for years," reported the New York Times. When Tyson executives discovered the bribes, the payments were simply switched to the veterinarians themselves.

Doctors will submit one invoice which will include the special payments formally [formerly?] being made to their spouses along with there [sic] normal consulting services fee," said a Tyson's audit department memo. No one was charged in the scandal and Greg Lee, Tyson's chief administrative officer who received the e-mail about the veterinarians, received $1 million and a $3.6 million consulting contract when he retired.

Related Topic(s): Agriculture; Corporations Agriculture; Food-Agriculture; Industrial Agriculture; Slaughterhouse; US Dept Of Agriculture; Workers, Add Tags
Add to My Group(s)
Go To Commenting
The views expressed herein are the sole responsibility of the author and do not necessarily reflect those of this website or its editors.