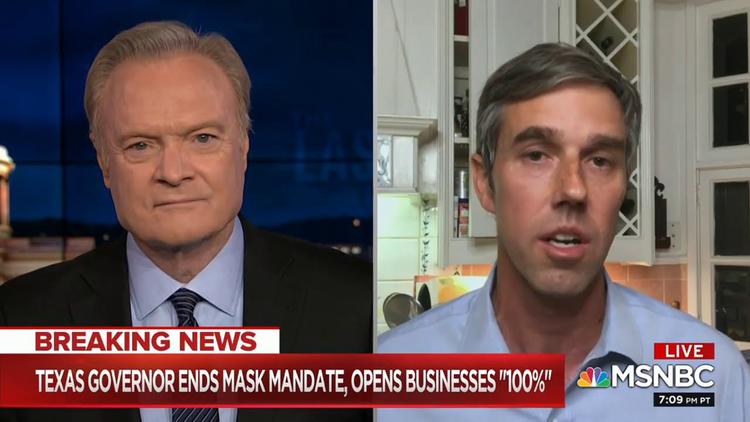 Roughly half the deaths and severe illness owing to COVID-19 are among minorities, including African-Americans and Latinos, even though those two groups make up less than a third of Americans. State Sen. Borris Miles, D-Houston, tweeted, "Black people are being disproportionately killed by COVID, there's a lack of vaccine in communities of color" and now the Governor has lifted the mask mandate. He has signed the death warrants of communities of color.. Today he made it clear Black lives don't matter. #txlege"

Abbott is pretty obviously trying to please retailers and restaurateurs at the expense of vulnerable populations in his state. This policy is in accord with the general Conservative principle that property is more important than human life. Moreover, in today's Republican Party, property has race, and White Property is very definitely held by them to be more important than Black and Brown lives. Mind you, half of COVID-19 deaths are whites, so the party is willing to off its own constituents for the corporations.

Ironically, his lifting of the mask mandate hurts small restaurants and retailers because they will have to try to impose a masking policy on their premises without the benefit of state backing. Some have faced violence from customers, and Asian proprietors are especially worried.

Texas has 153 dead from COVID-19 for every 100,000 people in the state. Hawaii's rate is 31 per 100k, and Oregon's is 53. The death rates per state have little to do with the political party in charge, and since the novel coronavirus hits the elderly and minorities harder, the proportion of these groups in the population helps shape the infection and death rate. Still, public policy is clearly consequential, and when states have mandated lock downs and masks their infection rate has fallen. What Hawaii and Oregon do show is that 45,000 Texans did not have to die in the past year.

President Biden has swung into action and the US is now vaccinating 2 million Americans a day. He has made arrangements to much increase the production of the Johnson and Johnson vaccine and hopes to have 300 million Americans vaccinated by June. That would produce herd immunity. Abbott keeps asking when would be the right time.

June. June would be the right time. Though some situations may continue to call for masking.

Only 10 percent of Texans have been inoculated, which is not enough to prevent the spread of the disease, especially as new variants circulate.

President Biden described the rush in some of the red states to remove state-mandated pandemic mitigation measures as "Neanderthal." I've used similar language and was told by one reader that I had been unfair to the Neanderthals.

Abbott, stung by the criticism (in which he was not personally named), struck back by accusing the Biden administration of releasing infected immigrants from detention centers into Texas and even of busing them to other states, spreading the virus around.

Nothing more need be said about Abbott's character than to report that he actually, in 2021, made these racist and bigoted comments, which have the added vice of being untrue. So, a liar and a white supremacist.

I wonder to which party he belongs?

KXAN reports, "As many as 100 asylum seekers are being released in Brownsville, in South Texas, each day, but they are tested for coronavirus in Mexico by the United Nations and, again, once they arrive in Brownsville. The asylum seekers, who were previously waiting in Mexico under the Trump administration's 'remain in Mexico' policy, cannot enter the United States without a negative coronavirus test."

These asylum seekers will go before an immigration judge and if their plea is rejected they will be deported. Biden is not "releasing" plague-infested immigrants en masse into the US, and Abbott knows these facts very well.

Related Topic(s): Covid-19; Death; Racism; Republican; Texas Gov Greg Abbott; Texas Politics, Add Tags
Add to My Group(s)
Go To Commenting
The views expressed herein are the sole responsibility of the author and do not necessarily reflect those of this website or its editors.