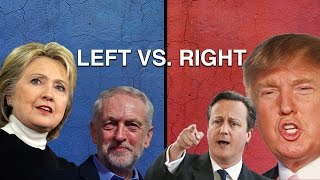 Two very different "populisms" that have arisen in response to neoliberal capitalism in the West.

A left-leaning social-democratic "progressive populism" targets the capitalist concentration of wealth and power and the unbridled pursuit of private profit as enemies of the people and the common good. This populism is egalitarian and radically democratic. It tends towards socialism. Its attractive policy agenda, supported by working-class majorities, includes the downward distribution of wealth, the expansion of the social safety net, university quality health care, increased minimum wages and union power, public jobs programs, and the protection of livable ecology (a Green New Deal). Its diverse political figureheads include Jeremy Corbyn (leader of the British Labour Party), Jean-Luc Melenchon (head of La France Insoumie), Yanis Varourfakis (leader of the new Progressive International), and even Bernie Sanders.

Then there's the reactionary anti-cosmopolitan nationalist "populism" of the right. This unattractive and backwards-looking populism shares some of left populism's disdain for giant globalist corporations and financial institutions. Still, its ire is aimed primarily at immigrants and racial and ethnic minorities and their perceived liberal and multi-cultural champions in the globalist "elite." This white-nationalist "populism" (some would say faux-populism) carries no small whiff of fascism. It aligns with noxious politicians like Donald Trump, Marine Le Pen (France), Alexander Gauland (Germany), Matteo Savlini (Italy), Nigel Farage (England), Viktor Orban (Hungary), Geert Wilders (Netherlands), and Jair Bolsonaro (Brazil).

So which of these two populisms -- the progressive populism of the left and the reactionary "populism" of the right -- does the corporate and financial ruling class prefer? The right-wing one, of course.

There's no mystery about why. The starboard strain offers no serious challenge to capitalist prerogatives. It works to exacerbate internal working-class divisions and to divert majority Caucasian anger away from those who possess real material and social power -- the top capitalist stratum and its professional and political class servants -- on to far less powerful scapegoats: immigrants, Muslims, Blacks, and Latinx people. Right-wing populism's anger at the capitalist "elite" is largely for show. Its real fury is directed at absurdly demonized racial, national, ethnic, religious, cultural, and sexual "others."

Left wing populism's anger at the bourgeois masters is for real. The authentic populism of the portside seeks to overcome racial, ethnic, national, sexual and other social divisions to build working-class and popular solidarity for the common good and against the wealthy Few and their professional and managerial cadres atop the commanding heights of capitalism.

That's why ruling-class-owned corporate media tends to give immigrant- and minority-bashing reactionary populism considerably more attention than it does left-leaning progressive populism. It's why Sanders' giant progressive-populist rallies were relatively invisible compared to Trump's widely covered white-nationalist rallies on U.S. cable news in 2015 and 2016.

The plutocracy-skewering Sanders campaign almost unseated the ruling class's preferred candidate Hillary Clinton with essentially no business support -- no small feat in the United States' money-soaked political process. You'd hardly have known this, however, from the dominant media coverage, which vastly downplayed the Sanders challenge even as it obsessed over every little Trump Tweet and snarl. It was "down the memory hole" (Orwell) with the highly civilized and avowedly Scandinavia-inspired, social-democratish Sanders phenomenon even as it happened. The Terrible Trump, whose brutal gatherings evoked memories of Nazi rallies in 1930s Germany, was, by contrast, the "authentic" and "populist" story on CNN.

Another and related way in which ruling class media channels its sheer elitist contempt for left (actual) progressive-populism is by failing to distinguish it from noxious reactionary populism and indeed merging it with the backward-looking variant. Listen to an interesting statement from last week from the editorial board of the New York Times regarding the extraordinary working-class, egalitarian, and anti-capitalist Gilets Jaunes ("Yellow Vests") uprising that has roiled France with large majority support in recent weeks. "The Yellow Vests on the Champs-Élyse'es," the Times editors intoned, "are cousins of the British who voted for Brexit, the Americans who voted for Donald Trump, and the Poles, Hungarians and Italians who elected populist, anti-democratic governments" (Editors, "Macron Blinks," NYT, Dec. 11, 2018).

The Times' editors' falsely merged the Yellow Vests with European, American, and British right-nationalist populism. They did so in defiance of their own paper's reporting from the streets of France. As Times correspondent Adam Nossiter reported in early December:

Paul Street (www.paulstreet.org and paulstreet99@yahoo.com) is the author of Empire and Inequality: America and the World Since 9/11 (2004), Racial Oppression in the Global Metropolis (2007), Barack Obama and the Future of American Politics (more...)
Related Topic(s): Democratic; Policy; Populism; Socialism, Add Tags
Add to My Group(s)
Go To Commenting
The views expressed herein are the sole responsibility of the author and do not necessarily reflect those of this website or its editors.