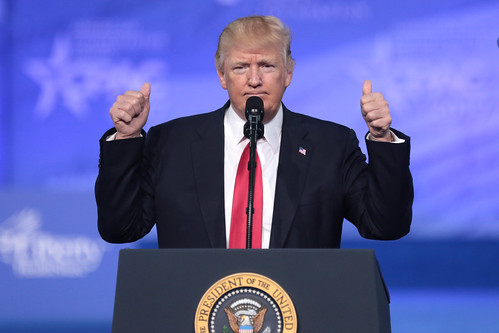 After two months of Trump, there are clear winners and losers:

1.The Resistance: Individual resistance groups are springing up throughout America. (90 days after the publication of the Indivisible guide there are now more than 6000 Indivisible units; 1000 in California.) Traditional progressive issue advocacy groups -- such as ACLU and Sierra Club -- have grown fangs and are organizing direction action.

Regardless of how they voted (or didn't vote) on November 8th, progressives are setting aside their differences and uniting in opposition to the Trump Administration.

Out here on the Left Coast, long-term activists cannot remember when there was so much activist energy. While non-Trump voters continue to be pissed off and depressed, the majority are ready to move out of the doldrums and into the streets.

2. Rachel Maddow: After the election, many progressives quit watching and reading the news. Fortunately, outlets like The New York Times and The Washington Post kept doing their jobs and we managed to learn about the subterranean infrastructure that swept Trump into power. Then Rachel Maddow rose to the occasion.

Rachel avoided (what has passed for) mainstream news -- Trump's latest tweet, discussion of whether Kellyanne Conway has lost her marbles -- and focused on the really big story: Trump's ties to Russia. As a consequence she's become enormously popular; Politico reported that her ratings are growing three times as fast as those for Fox News. "When the going gets tough, the tough get going."

3. The Stock Market. Legend has it that on August 24, 410, while the Visigoths sacked Rome, the Roman stock market hit an all-time high due to a surge in demand for fire insurance and private-security services.

Since the beginning of 2017, the Dow Jones Industrial Average is up 5.8 percent. While there are multiple reasons for this, it's safe to say that Wall Street assumes Trump will provide a "business-friendly environment" with fewer regulations and lower taxes. (Bank stocks are up because the Federal Reserve has raised interest rates.)

Nonetheless, there are those who urge caution, noting that Trump may not deliver on his promises. In addition, Barrons Magazine observed that the S&P 500 companies currently have an average price-earnings ratio of 24.7; adding, "We don't believe that a 2% growth environment justifies that valuation."

Look! Over there! Isn't that a Visigoth?

4. Trump's favorite Oligarchs. Shortly after the election, I observed that Trump prevailed because he had enlisted the support of American oligarchs such as Robert Mercer. I predicted that Trump would adopt the platform espoused by unsuccessful GOP candidate Ted Cruz including a massive reduction of discretionary spending. "Cruz called for the elimination of the Departments of Education, Commerce, Energy, Housing and Urban Development, plus the Internal Revenue Service. Trump seems open to these changes and has called for the elimination of the Environmental Protection Agency." The only way to justify the appointment of dimwits such as Betty DeVos, Ben Carson, Rick Perry, and Scott Pruitt is that they are part of Trump's plan to devastate certain aspects of the Federal government, pretty much everything except DOD.

5. The Republican Party. Two months into the Trump regime, he's already turned on the Republican leadership -- apparently stepping away from Paul Ryan's healthcare legislation. Republicans find themselves in the position of the woman in the fable who took in a wounded snake, nursed it back to health, and then was fatally bitten. The dying woman gasped, "Why did you bite me?" and the snake answered, "You knew I was a snake when you took me in."

Republicans knew that Trump was a snake but imagined that when he entered the White House, Trump would change. Hah!

Bob Burnett is a Berkeley writer. In a previous life he was one of the executive founders of Cisco Systems.
Related Topic(s): America; Congress; Democratic; Democrats; Government; Indivisible; Legislation; Progressives; Republican; Resistance, Add Tags
Add to My Group(s)
Go To Commenting
The views expressed herein are the sole responsibility of the author and do not necessarily reflect those of this website or its editors.