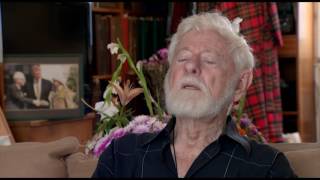 DURING THE last few days, I met with two old friends: Yasser Arafat and Yitzhak Rabin.

Well, the term "friends" may not quite be appropriate. Certainly, Arafat called me "my friend" in a recorded message for my 70th birthday, but Rabin called nobody "friend." That was not his character.

I am glad that I knew both from close up. Without them, my life would have been poorer.

I DON'T think I ever met two more different people than these two.

Arafat was a warm person. An emotional person. His embraces and kisses were ceremonial, but they also expressed real sentiment. I brought many Israelis to meetings with him, and they all recounted that after 10 minutes in his company they felt as if they had known him for years.

Rabin was the exact opposite. Like me, he abhorred physical contact. He was remote. He did not exhibit feelings. Only on close acquaintance did he reveal himself as having quite strong feelings indeed.

But these two so different persons had one thing in common. Both were fighters throughout their lives. Rabin gave up academic studies in order to join the illegal Palmach ("shock troops") during the time of British rule. Arafat gave up a career as an engineer in Kuwait in order to set up the PLO (Palestine Liberation Organization). Rabin was six years older.

Both devoted the major part of their adult life to fighting for their peoples -- and against each other. Both were not gentle in their wars. Rabin once ordered soldiers to "break their (the Palestinians') arms and legs!" Arafat ordered many cruel actions.

After a long life of war, both turned towards the way of peace. That was much more dangerous. Rabin was murdered by a Jewish fanatic. Arafat was murdered (as I believe) in a more sophisticated way by the agents of Ariel Sharon.

I WAS privileged to hear from both how and why they made their fateful turn towards peace.

Arafat's explanation was simpler. It went more or less like this (in my words):

Then came the October 1973 war (called the "Yom Kippur War" in Hebrew). The two strongest Arab armies attacked Israel. They achieved total surprise and on the first day obtained imposing results. The Egyptians overran the Israel Bar-Lev line, and the Syrians approached the Sea of Galilee.

And lo and behold, in spite of these initial successes, the Arabs were defeated in the war. When a cease-fire was imposed, the Israeli army was close to Damascus and their way to Cairo was open.

Related Topic(s): Friends; Israel; Liberation; Palestinian; Ramallah, Add Tags
Add to My Group(s)
Go To Commenting
The views expressed herein are the sole responsibility of the author and do not necessarily reflect those of this website or its editors.