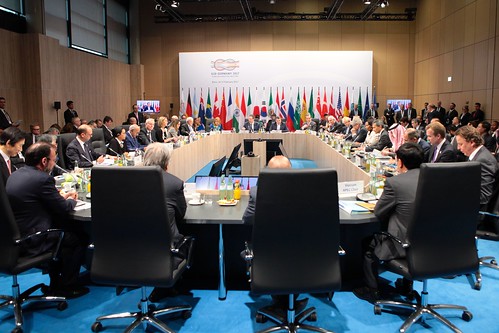 Two meetings ended this week: the G20 meeting, a forum for leaders and central bank chiefs, and the UN Climate Change Conference in Bonn.

At the G20, the work behind the scenes to try and ensure some measure of global growth was probably more important than the leaders' palliatives. Donald Trump, as usual, did the headline grabbing.

He appeared most comfortable with Vladimir Putin as the two dissed the media, agreed there was no meddling by Russia in the 2016 election, and, to crown the event, Putin invited Trump to Russia ... for next year's victory parade. Germany continues to be the whipping boy for US and European leaders' get-togethers these days. Less than a month ago it was the 75th anniversary D-Day commemorations both in England and at the landing site in Normandy. Poor Angela Merkel had to stand there and take it. Surely, German 18-year olds, who too were drafted and fighting for their country deserved some sympathy. Do wars make sense, even this so-called good war. With 50 million dead across the world, how can it be called 'good'? Will reason ever prevail?

You might think with all the mayhem of WW2, we would have learned a lesson. Hell no! Korea came next. Pile up some more corpses ... and then in a few years, the US president is being best buddies with the leader of North Korea, and with the leader of the 'evil empire.' That empire the US just had to stop because there was a domino theory: if one domino falls, then the next is pushed down and so forth ... Vietnam, Cambodia and the rest.

They did fall; yet now we are trading with the same Vietnam, Cambodia and the rest, even China the scourge in 1950s Korea. How much of the stuff we use is imported from these countries? Then think of the wide swathe from Indonesia to North Africa, then across the ocean into Latin America. Think of the havoc created in the lives of people in these areas.

Asylum seekers piling up at Trump's border fence? Then what about the coup in Honduras which is now murdering protesters, union leaders and the like. Whether its banana plantations in central America or copper mines in Chile, the world has to be kept safe for American corporate interests, one way or another. Good luck Mr. President in your meetings with Xi and others. As you well know Mr. Xi gets oil from Iran, which is also fast friends with Russia. Does that mean that Iran threats are a bluff? We hope so.

The second meeting, the UN Climate Change Conference in Bonn, was stymied in its goals by our good friends the Saudis, to whose coat tails we hung on, perhaps not altogether grimly. At the closing plenary, a watered down agreement put an end to formal discussions on the UN Inter-Governmental Panel's 1.5C climate change report. It has been removed from further UN consideration or dialogue due to Saudi objections with US backing.

According to scientists -- the people who have spent their lives studying climate -- climate change is an existential issue. Means little to the Donald who trusts his gut instincts. It means more work when we will have wasted crucial years and the world's roasting. By the way, France just hit a new high temperature record of 45.9C.

Arshad M Khan is a former Professor. Educated at King's College London, Oklahoma State University and the University of Chicago, he has a multidisciplinary background that has frequently informed his research. He was elected a Fellow of the (more...)
Related Topic(s): Climate; Conference; D-day; Korea; Meeting; Trump; War, Add Tags
Add to My Group(s)
Go To Commenting
The views expressed herein are the sole responsibility of the author and do not necessarily reflect those of this website or its editors.