"I will introduce or support legislation that addresses the issue of underfunding IDEA through reforming allocation, funding and distribution mechanisms of resources to public schools"

The last time incumbent Brad Sherman had to run in a competitive race he physically assaulted his opponent on the debate stage. With that race won, Sherman has largely lost his passion. On foreign policy, he is a right-leaning Democrat who mirrors Republican talking points against Obama's Iranian deal during his town halls. Overall, he is a moderate Democrat who supported Hillary Clinton in the 2016 Democratic primary.

Having won his recent elections by wide margins, Sherman does not even appear to be putting any effort towards campaigning to retain his seat. In fact, his website does not even appear to have been updated since 2018. The site says "Talk to me. I'm listening." However, while he may be interested in hearing what constituents have to say, this does not mean that he wants to have a conversation. As in 2018, I asked my Congressman questions about federal education policy but did not receive a response.

As he has for the past two election cycles, Tea Party Republican Mark Reed is challenging Sherman. Reed was also sent these questions, but other than asking about the deadline for response, he did not answer the request.

Raji Rab is another perennial candidate who will also be on the ballot. Like in the past election, he did not provide a response to the education questions.

The two remaining candidates, Brian Carroll and CJ Berina, both describe themselves as progressives. Should either one of them win the second most votes, they will lock Mark Reed out of the general election. Respecting the constituents they hope to represent, they both provided answers to the questionnaire. Their responses are presented in the order that they were received:

Question 1: Federal legislation authorizes "Congress to contribute up to 40% of the average per-pupil expenditure" for mandated special-education services. Unfortunately, this funding has never materialized. What will you do to ensure that programs and services for those with special-education needs are appropriately funded? 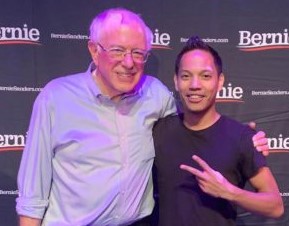 CJ Berina: "I would support or if no one else has or will, introduce legislation to reform key aspects of our economy, energy sector, agriculture, and among much else education. I will introduce or support legislation that addresses the issue of underfunding IDEA through reforming allocation, funding and distribution mechanisms of resources to public schools similarly to as was done in Pennsylvania where the state legislature passed a bill ending the funding of public schools through property taxes and instead funding them through a statewide sales tax - taxing earners and consumers rather than owners and dwellers. This is one way we can not only increase funding to schools in low-income communities but begin to address the racial and economic segregation that exists predominantly in the public school system today. I will also introduce or support legislation to provide mandatory funding to ensure that the federal government provides at least 50 percent of the funding necessary for high-quality special education."

Brian Carroll: "For one, we need to remove the words 'up to' because it's often used as a trick to be technically under compliance while abdicating its responsibility to our students. Congress needs to contribute no less than 40% of the average per-pupil expenditure for special-education services and in some areas more to make up for budget shortfalls that burden lower-income school districts, not the mere 16% that we've gotten used to seeing. But our laws are full of promises like this that just end up in an unfunded graveyard. Part of my platform, particularly as a civics nerd who likes to get into the nuts and bolts of these issues, is to find these kinds of useful, approved programs that have been ignored and put them back in the forefront. The overall problem is that we don't blink an eye at increased defense spending or massive tax cuts to the wealthy while we nickel-and-dime public goods. We need to elect more representatives that won't just vote the right way on these issues, but fight for them."

Question 2: Currently, special-education funding is based on the total student population instead of the actual population that needs services. What will you do to ensure that funding is actually based on the number of children requiring services?

CJ Berina: "I will introduce or support education-reform legislation that would guarantee funding for and: