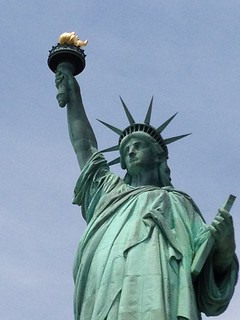 As the 2016 presidential campaign heats up now, we'll hear a lot more about "the American dream." But there are two "American Dreams," very different from each other, and each with a shadow side. To survive today's toxic politics and make progress, we Americans must understand both the poison in these two dreams and the power they hold for good.

Of course, today's political version of the American dream is the familiar one of a house in the suburbs, two cars, a good job with benefits, college for the kids, and a comfortable retirement. Right now it seems as if that version of the American dream is beyond reach for all but the 1%, a fact that helps fuels our angry election season. Then there's the other side of it: the way it's always been a fundamental source of suffering for people of color in this country, as they were and still are exploited and abused to create prosperity for others. That creates anger too, more and more openly now. Although many pundits and citizens are complaining about the level of anger coming from everywhere at once, all of it has great potential for good, as well as the risk of doing great harm.

Why? Because no good thing happens in politics in our country until people get good and mad. Moreover, our citizens aren't just mad because the material American dream is out of reach or was never designed for them. They are also mad because our other American dream has been so badly betrayed or never was applied to them. That dream is what I call the "dream of our nation," or the "ideal American identity story." That is the idea of our country as aspiring to be about the perfect expression of freedom, democracy, rule of law, justice, fairness, equal opportunity, and hope for a better life. Of course it takes two forms also. On the negative side, it's the idea of our country as in reality exceptional among the nations, for our democracy and for our special mission to bring it to the rest of the world. This version of the American dream--the dream of our nation-- regularly confuses people into believing that we are already a perfect nation and can do no wrong. That idea of the American dream has allowed us to abuse and make war on other peoples to get their resources, all the while priding ourselves on our wonderful "export of democracy." It's the not-so-secret side of the American dream of our nation, with its roots in genocide, force, and theft as the answer to every problem. It makes the genuinely positive traits of legitimate American ideals fade into the background in a way that serves no one.

Because there really are positive American ideals, the ones that make up what I call the "ideal American identity story." That is a story of our country aspiring to be about the perfect expression of freedom, democracy, rule of law, justice, fairness, equal opportunity, and hope for a better life. It's also true that this "ideal American identity story" is taken for granted by many privileged white Americans who feel they have all of that already. They mistakenly believe the dream of an ideal American is the same as the reality of America, at home and abroad. But the dream of America as a country constantly reaching for a more full and pure expression of our highest ideals is exactly what progressive organizers of all kinds have always used as the lodestar for their work. In every era they have called us to be better than we are now, to live more fully up to those ideals.

Today's young, social-media savvy organizers of Black Lives Matter and the many other social justice groups active right now are the next wave of that cadre of idealistic organizers. They are the heirs of those who have always waked us from our toxic sleep. When they call for justice in the streets, on the freeways, in the board rooms, or wherever, deliberately or not, they evoke that dream of an ideal America, where our highest goals are justice, democracy, rule of law, fairness, equal opportunity, and hope for a better life for everyone. They follow in the footsteps of our forebears who refused to pay more taxes on tea, and who were against slavery and ran the underground railway. The ones who got the vote for women, and the ones who helped FDR put into place so many social reforms to help working people in the Depression. The ones who led the Civil Rights movement, and those who got marriage equality for all. And the ones who last fall lifted up the late, great Detroit-based community organizer Grace Lee Boggs as a continuing inspiration. Her longtime motto "R(e)volution," is a gift to us that needs to last as long as we do. It expresses our permanent dream of an America evolving toward the ideal, a goal that soars above all day-to-day limits and abuses, drawing us together as a people. Let us never forget this dream of the "ideal American identity story." Because we must keep it alive in our minds and call it by its right name in order to move toward it together.
-----------------------------------------------
Susan C. Strong, Ph.D., is the Founder and Executive Director of The Metaphor Project, http://www.metaphorproject.org, and author of our new book, Move Our Message: How to Get America's Ear. The Metaphor Project has been helping progressives mainstream their messages since 1997. Follow Susan on Twitter @SusanCStrong.

Related Topic(s): America; Anger; Democracy; Equality; Fairness; Freedom; Hope Hopefulness; Identity; Justice; Organizer; (more...) People; Politics; Reform; Rights, Add Tags  (less...)
Add to My Group(s)
Go To Commenting
The views expressed herein are the sole responsibility of the author and do not necessarily reflect those of this website or its editors.