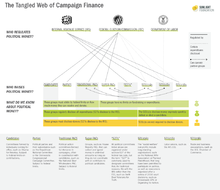 On August 5, US Representative Joaquin Castro (D-TX) posted an infographic to Twitter naming and shaming his city's most generous supporters of President Donald Trump's re-election campaign: "Sad to see so many San Antonians as 2019 maximum donors to Donald Trump .... Their contributions are fueling a campaign of hate that labels Hispanic immigrants as 'invaders.'"

"Targeting and harassing Americans because of their political beliefs is shameful and dangerous," tweeted House Minority Leader Kevin McCarthy (R-CA), apparently forgetting the time he similarly targeted Democratic donors in the 2018 midterms.

House Minority Whip Steve Scalise (R-LA) played the sympathy card: "This isn't a game. It's dangerous, and lives are at stake. I know this firsthand." Scalise was shot and wounded by a Bernie Sanders supporter in 2017.

US Senator John Cornyn (R-TX) called Castro's tweet "grossly inappropriate" and characterized it as "encouraging retaliation." While re-tweeting it.

Come on, Republicans. This isn't even a tempest in a teapot. Castro didn't "dox" anyone, nor did he call for, explicitly or implicitly, violence against anyone. His tweet included only public information available to anyone with an Internet connection and a few minutes to waste.

Candidates for federal office are legally required to report the names, addresses, and occupations of everyone who donates $200 or more to their campaigns. Those names, partial addresses, occupations, and amounts donated reside in a searchable database on the Federal Election Commission's web site.

I personally don't support these campaign finance laws. I think disclosure of donor information should be voluntary. I would be disinclined to vote for a candidate who concealed where his or her support came from, and hope other voters would as well, but I don't believe that political speech in the form of campaign donations should be forcibly regulated in any way.

But whether I like it or not, campaign contributions are, by law, easily discovered public information, on the premise that we all have a right to know who's giving money to which candidates ... and to act accordingly (short of criminal violence) with respect to both those candidates and those donors.

And, let's face it, someone who donates the maximum legal amount ($2,700) to a presidential candidate has an agenda. That agenda might be political (she supports the candidate's ideas) or commercial (he's trying to buy influence) or personal (they're buddies or relatives). Whatever that agenda is, they're putting real money into it.

Those possibilities are just costs or opportunities of political donations. If you're not proud of your agenda, keep your checkbook closed. "Problem" solved.

Related Topic(s): Campaign Finance; Castro-Joaquín; Donald Trump Campaign, Add Tags
Add to My Group(s)
Go To Commenting
The views expressed herein are the sole responsibility of the author and do not necessarily reflect those of this website or its editors.