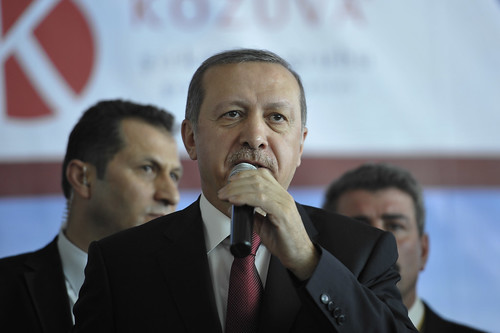 Turkey's President Erdogan has claimed that military operations against the Kurdistan Workers' Party (PKK) will continue until "the very last rebel is killed." What is puzzling about this statement is that after more than 30 years of violence that has claimed the lives of over 40,000 Turks and Kurds, Erdogan still believes he can solve the conflict through brutal force. However, he is fundamentally mistaken, as the Kurds' long historical struggle is embedded in their psyche and provides the momentum for their quest for semi-autonomy that will endure until a mutually accepted solution is found through peaceful negotiations.

To understand the Kurds' mindset, Erdogan will do well to revisit, however cursorily, their history and the hardship they have experienced since the end of World War I.

An independent Kingdom of Kurdistan lasted less than two years (1922-1924) before it was parceled out between what became Iraq, Iran, Turkey, and Syria, regardless of ethnicity or geographic relevance. Nevertheless, they have clung to their cultural heritage, the rejection of which by Turkey remains at the core of their grievances today.

From the time Kurdistan was dismantled, and despite the discrimination against the Kurds and the precarious environment in which they found themselves, they remained relentless in preserving their way of life, fearing that otherwise their national/ethnic identity and language will gradually fade away.

In Iraq, there are seven million Kurds (roughly 15 percent of the population). Since 1991, they have consolidated autonomous rule under American protection and now enjoy all the markers of an independent state.

In Syria, the two million Kurds (about 9 percent) have been largely politically inactive under the Assad regimes. In the past five years, they took advantage of the civil war and established a semi-autonomous region which Erdogan vehemently opposes, fearing that it could prompt Turkish Kurds to seek autonomy of their own la the Iraqi Kurds.

The eight million Kurds in Iran (nearly 10 percent) officially enjoy political representation but have historically experienced socio-political discrimination, which emboldened the militant wing of the Kurdistan Democratic Party in Iran (KDPI) to turn to violence, making the Iranian Revolutionary Guard their main target.

Turkey houses the largest Kurdish community (15 million, approximately 18 percent). Although they are largely Sunnis like their Turkish counterparts, their national aspirations for autonomy and cultural distinction trumps their religious beliefs.

Prior to the formation of the PKK, Abdullah calan and his followers raised awareness about the Kurds' plight in Turkey through political activism throughout the 1970s. However, after becoming the target of a government crackdown, they moved toward guerilla warfare, forming the PKK in 1978 and launching its insurgency in 1984 during the premiership of Turgut zal.

In 1999, calan was arrested and sentenced to death, but under European pressure and due to the prospect of EU membership, Turkey abolished the death penalty and calan's sentence was commuted to life imprisonment. The fact that he was not executed allowed him to continue his role as a leader and assume a moderate voice, which remains essential for future negotiations.

In 2006, the imprisoned leader called for peaceful negotiations to end the conflict. His call was not heeded by Erdogan, who was unwilling to grant the Kurds any significant concessions that would allow them to enjoy their cultural tradition, including the use of the Kurdish language in their public schools and universities, and be permitted to run some of their internal affairs.

He partially relented in 2013 and granted the Kurds small concessions by increasing Kurdish-language education (only in private schools), allowing Kurdish town names, and lowering the parliamentary threshold to allow Kurdish and other smaller parties to enter parliament.

During scores of conversations I had with many Kurdish MPs and academics who have firsthand knowledge about the Kurdish problem, no one suggested that the Kurds want independence, but rather certain socio-economic and political freedoms consistent with Turkish democracy.

Conversely, Erdogan insists that the Kurds already enjoy full Turkish citizenship in a "democratic Turkey" and are full-fledged Turkish nationals. He proudly points to the fact that the People's Democratic Party (pro-Kurdish party) has 59 seats in the parliament and is part and parcel of the legislative body.

Related Topic(s): Conflict; PKK; Turkey; Violence-War, Add Tags
Add to My Group(s)
Go To Commenting
The views expressed herein are the sole responsibility of the author and do not necessarily reflect those of this website or its editors.