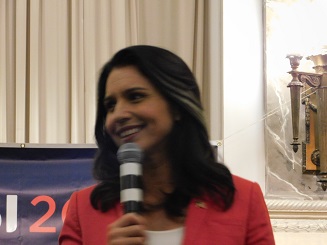 Shut out of the third debate after exceeding debate criteria in the number of unique donors and the required percentage in close to 30 polls, Tulsi Gabbard continues to attract energetic grass roots activists to her campaign. Rigging won't stop Tulsi from continuing her bid for the Presidency. She has declared her intention to stay in the race, debate or no debate. 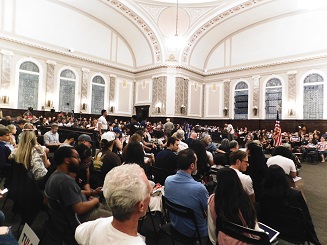 On September 8, Tulsi Gabbard was able to fill a Los Angeles venue that reportedly seated a thousand after only one day's notice that the event would be held there. Once the seats and floor were taken, supporters took to standing, some behind Tulsi as she spoke. Los Angeles and Orange County volunteers worked to get out the word about the event. OC volunteers brought giant banners that were placed along the street to notify people driving by that Tulsi would be coming. About twenty volunteers from Los Angeles, Orange and Riverside Counties showed up to volunteer in putting the evening together. 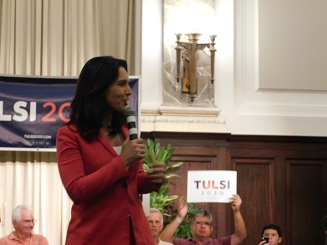 The Los Angeles audience gave Tulsi standing ovations and repeatedly broke into applause as she spoke about important issues that other candidates are afraid to touch. When asked why they supported her, the most common reason given by her supporters was Tulsi's courage and honesty. Most progressive experts consider Tulsi to be the best of the candidates on foreign policy. Her domestic policy parallels that of Bernie Sanders, the candidate for whom she gave up her DNC career to help out in his bid for the 2016 nomination. The two continue to be close. 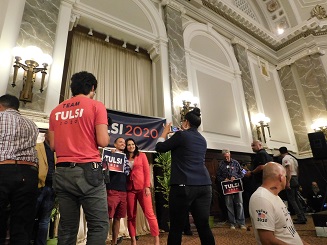 Following the event, audience members who wanted selfies with Tulsi formed two long lies that kept her at the venue until almost 11 P.M. (The event started at 7 P.M.) The long lines for selfies with Tulsi resembled the crowd lining up for pictures with Bernie at the Montalban Theater. Polls show Tulsi as high as 8% but they do not show what observers see. Tulsi and Bernie pull in California crowds on last minute notice like no other candidates.

Less than a week before the Los Angeles event, Tulsi supporters were the most visible of all campaign supporters at the Wilmington Labor Day parade and picnic. They were seen marching in the parade, handing out over a thousand pieces of literature and carrying giant banners around the picnic area. Supporting and assisting them with their tabling efforts were the Bernie supporters. Despite attempts by the Warren campaign to push Tulsi and Bernie supporters apart, they remain a unified group.

Evidence of possible sabotage or oddities are a problem with both Bernie's and Tulsi's campaigns.

As if DNC and media misconduct with respect to their campaigns is not enough, there is seeming evidence of internal problems that could destroy both campaigns if not corrected.

In July, multiple Los Angeles area Bernie Sanders events were sabotaged by failure to timely notify his supporters of the existence of the events. Would-be small donors were turned away from the Montalban Theater in Hollywood and told the venue was full until it was pointed out that half the seats were still empty and not full. At his July Santa Monica and Little Tokyo events, lack of notice resulted in attendees who had found out about the events and shown up to the unfilled venues having to text fellow supporters to let them know Bernie was in town. By the time Bernie arrived, the attendees had gotten through to enough supporters to fill the events. In August, Indymedia reporters were disinvited from a homeless event under the claim that only the major media was welcome to be with Bernie at the event. This was followed by last minute invitations to the Indymedia after they had already been told not to bother coming and did not have driving time to get to the venues. Susie Shannon, the California director for Sanders, got a lot of blame from supporters regarding these fiascos. At the May/June California Democratic Convention Sanders booth, someone who seemed to have some kind of official status was promoting Elizabeth Warren to people who came by the booth.

The failure to provide accurate and timely event information is a serious problem in Tulsi's case. The Tulsi campaign did not inform anyone in California that Tulsi would be one of the candidates at a Presidential forum held by the Asian American and Pacific Islander Community in Costa Mesa, CA for over a month after it knew about her plans to be there. Her campaign finally sent out a notice to supporters the afternoon of the day before the event. Tulsi volunteers were instructed by the campaign not to bring flyers or campaign paraphernalia inside the Segerstrom Center. Those planning to wear Tulsi T-shirts were told to hide them under other clothing. 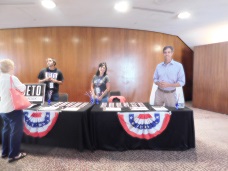 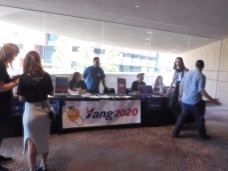 In contrast, Andrew Yang supporters and Beto O'Rourke supporters took full advantage of the opportunity to table with fliers, buttons, banners, cardboard cutouts and other campaign promotionals inside the lobby of the Segerstrom Center, itself. Beto wasn't even part of the forum. Segerstrom did not charge candidates for tabling. It was a free courtesy. Tulsi supporters encouraged the campaign to let them promote Tulsi at the event but were told by Tulsi's campaign this would not be allowed and to leave all literature behind. According to Tulsi supporters, her events coordinator insisted the campaign did not want a volunteer team at the event. Yang's campaign had about 40 volunteers. Some of Yang's supporters said they found out about the event a month before and that Tulsi had been scheduled before Yang. An additional problem at Segerstrom was that the ticket price for the better seats was $75. One of Yang's supporters indicated most of the team was comped into the forum by the campaign. Many of the "Yang Gang" were computer enthusiasts who were hoping to one-day work with Yang in the computer business, making the event a possible job opportunity. One Yang supporter said he planned to deduct his expenses on his taxes. One of Tulsi's Orange County volunteers covered the ticket costs for several of Tulsi's supporters but most of Tulsi's supporters who found out about the event stayed away, feeling discouraged from attending by the Gabbard campaign. Making matters more confusing for her supporters, Tulsi supporters were told the night before and that morning that Tulsi might not be there at all. Though the theater was largely empty even for Yang's part of the event, Yang took most of his supporters with him when he walked out of the theater. From the lobby where his tabling was taking place, he rallied with his supporters. Video of his lobby promotional now has over a millions views. Most of his supporters, except those tabling, left with him. The press, waiting up in the spin room, learned that he had skipped out on them. After Yang's forum presentation was finished and before the intermission, the hosts spoke as if nobody else was coming---though billionaire Tom Steyer was scheduled after the intermission and Tulsi was scheduled to be last. 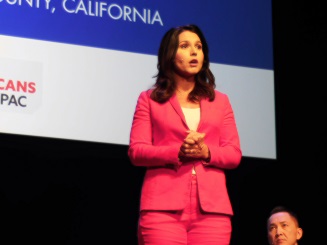 Tulsi Gabbard at AAPI Presidential Forum
(Image by Henry Samson)   Details   DMCA
Tulsi won over many of the remaining Yang supporters as well as others in the theater. Unlike Yang, she was asked tough questions. That always seems to be the case. Her answers received solid applauses from those present. At one point she went down into the audience to take questions. Though Tulsi was well received by those present, several of her supporters were upset over her campaign's handling of the event. A number of her volunteers said they'd work with the grass roots but would no longer deal with the campaign. Some said that, though they would vote for Tulsi, they were through volunteering. Disparaging supporters is not good for any campaign. As noted in a previous article, while Tulsi's events coordinator kept the Tulsi supporters practically invisible at the DNC meeting in San Francisco, Kamala Harris's campaign made points with the DNC by being extremely visible. A preference for invisibility is something Tulsi's campaign needs to correct and avoid in the future if Tulsi is genuinely interested in being the nominee. Imagine if a million viewers had seen Tulsi in the lobby with a host of cheering supporters, which would have been possible if the campaign had allowed its supporters to make the event successful.

While all campaigns make major mistakes, the support for Tulsi and Bernie is overwhelming when you see their crowds at publicized events. Even on short notice, both Tulsi and Bernie have shown that they can pull together sizable crowds when the campaign staff doesn't get in the way. People are eager for Tulsi's message of peace and putting people before Wall Street and of ending the reign of the military industrial complex.

Henry has been a professor of political science and legal ethics and an advisor to many successful candidates for public office. He is currently working on a book about the inequality crisis in America.
Related Topic(s): Bernie Sanders 2016 Presidential Candidate; Bernie Tulsi; Election Fraud; Grass Roots Pressure; Pollsters; Tulsi Gabbard; Tulsi Gabbard, Add Tags
Add to My Group(s)
Go To Commenting
The views expressed herein are the sole responsibility of the author and do not necessarily reflect those of this website or its editors.