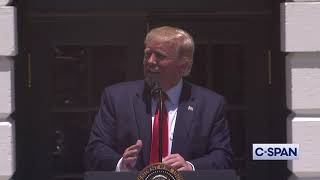 President Trump defends tweet President Trump responds to questions about his tweet criticizing minority freshmen lawmakers in which he said they should .go back. to the countries from ...
(Image by YouTube, Channel: C-SPAN)   Details   DMCA

President Trump responding to questions about his tweet criticizing minority House lawmakers which he said they should "go back" to the countries they came from.

"Persuading the propagandized"- that's a quote from a comment made to a recent article by Andre Vltchek. Think about that for a moment. The enormity of it.

As with many of us who attempt to expose others to ideas that run counter to what the government and its complicit, enabling MSM claim as "fact"-yet unsubstantiated until confirmed by evidence from reputable sources-is no easy matter.

So many people seem closed off from anything that runs contrary to what they've come to believe. Especially coming from "official" claims they've been exposed to. Unless one is open to other views there is often out right resistance, even ridicule of the one offering something that may be counter to the "official" version-even if that "official" version has no validity and certainly not supported by "real" evidence.

Trump sent missiles into Syria under the unproven assumption Assad gassed his own people. Trump had no proof other than videos made by the suspect White Helmet emergency aid workers. Aid workers found only in al Qaeda controlled terrorist areas. The videos they produced were actually stage managed scenes after a supposed chemical attack. Reputable investigative journalists interviewing residents of these supposed chemical attacks confirmed the White Helmets stage managed the chemical attack scenes.

Look at the recent two year Mueller investigation into the purported Russian interference in the 2016 presidential election that alleged Russian hacks got Trump elected. Mueller concluded there was no collusion. However that hasn't stopped the Democrats still believing the Russian's did it. No evidence? So what.

Perhaps this age of relativity, the prevalence of social media and instantaneous communication contributes to many people believing something is "factual" yet without substantiated evidence is just assumed.

Too many people want, expect instant answers. They seemingly have little or no time for complexity. Yet we're in an age where complex issues are the norm. There are no easy answers.

Name any issue or problem facing this country. From the climate crisis to health care to the bloated weapons industry to endless war our $22 trillion national debt to our corrupted electoral system, we can't seem to find the rest room never mind begin to solve any problem or issue. These and the myriad others aren't even on the agenda, never mind discussed.

Call it what you will. Political dysfunction, power grabbing, the corrupting influences of corporations and lobbyists with their influence peddling, corporate ownership of the MSM as the unofficial organ and complicit enabler of the state, there is no end to the issues we face.

With Trump as president we have domestic and foreign policy by tweet. There is no coherence; contradictions abound. One day North Korean leader Kim Jong-un is ridiculed as :"Rocket boy", then after a summit with him he's my "close friend". Another day he tweets we could "nuke Afghanistan and the war would be over in 10 days"-apparently without the slightest realization that would be a war crime. He threatens Iran blaming them for incidents involving oil tankers off the coast of the UAR and others in the Gulf of Oman. He sends a spy drone over Iranian air space which they destroy with a missile strike. He then authorized a retaliatory strike then reportedly rescinds the order ten minutes before it's executed.

It's like trying to remain sane in the midst of a surreal "official" state of chaos.

Retired. The author of "DECEIT AND EXCESS IN AMERICA, HOW THE MONEYED INTERESTS HAVE STOLEN AMERICA AND HOW WE CAN GET IT BACK", Authorhouse, 2009
Related Topic(s): President Trump; Surreal; Tweet, Add Tags
Add to My Group(s)
Go To Commenting
The views expressed herein are the sole responsibility of the author and do not necessarily reflect those of this website or its editors.