Adolf Hitler, head of the German Nazi party (that is the party with the mis-leading name, sort of like Trump will make America great again, when he really means "white" again), was appointed Chancellor (Prime Minister) of Germany by President Paul von Hindenburg on January 30, 1933. The Nazis, although powerful, were still not the dominant political party in Germany of the time. In fact, there was no dominant political party at that time.

In elections to the Reichstag (the German Parliament) after they became an important national party in the late 1920s, they regularly ran some somewhere between 32 and 37 percent of the vote (sound familiar?) But they were loud, and they had a large private army, the Sturmabteilung (SA), behind them. They also had significant ruling class support, from the likes of the steel baron Fritz Thyssen (who as readers of my columns know well raised money for the Nazis abroad from such folks as the US George Herbert Walker [sound familiar?]). 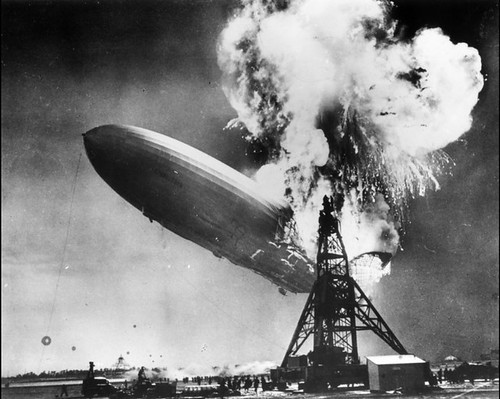 It's not this Hindenburg disaster we're thinking about.
(Image by urcameras)   Details   DMCA

Germany was in trouble, what with the Depression and the continuing reparations payments to the Western Powers which had been victorious in the First World War. It also had a powerful labor movement and two powerful left-wing poltical parties, the Communists (KPD) and the Socialists (SPD). They should have been allied against their common enemy, Hitler and the Nazis. But for historical reasons dating back to World War I they weren't. As well, the KPD was part of the Moscow-based Comintern (Communist International) whose policies were set from Moscow. Stalin described the SPD as "Social Fascists." And so, there was no alliance (which eventually proved fatal --- literally for many Communists and Socialists alike --- in the next dozen years). And so, facing increasing unrest from both the Right and the Left, Hindenburg was reluctantly prevailed upon to appoint Hitler as Chancellor.

Two former right-wing Chancellors, Kurt von Schleicher and Franz von Papen, thought they could "keep Hitler under control," which influenced the decision of von Hindenburg ("von" indicated Prussian nobility), who was very reluctant to appoint the Austrian "Little Corporal" to the post. Once in power, Hitler started using it with a vengeance, beginning with locking up Communists on the night of his accession to the post. Neither von Schleicher nor von Papen were successful. The former actively tried to control his worst excesses, then get him deposed. He was killed on June 30, 1934, "The Night of the Long Knives." Von Papen, simply marginalized by Hitler, survived the war, but escaped any meaningful judgment/punishment after it. Which brings us to our time, and what is almost certain to happen should Trump win re-election in 2020.

Trump and his allies, on both the Right and (sadly) on the Left are working day and night in the attacks on Mueller and his Report and the countless other evidence of both collusion between the Trump campaign and Russia and Trump's efforts to obstruct justice in re the Report. (And after all, if there were no truth to it, why would Trump have fought so hard to derail it and is now, with his in-house lawyer Bill Barr, fighting so hard to dis-credit it.) The on-paper evidence against Trump and his personal crimes on a variety of fronts is building up. For example: although Trump is fighting hard to prevent their total release, New York State Attorney General Letitia James apparently has copies of at least some of the the Trump/Deutsche Bank documents.

Trump's appeal of a court decision ordering the release to the House of records from his financial services form, Mazars USA LLP, has been sped up. The House Intelligence Committee will be able to see major redacted portions of the Mueller Report, other than Grand Jury proceedings. The Trumpublicans (tm) on that Committee want to see the documents too, which indicates that they think that there is something in them that they can use for Trump's defense. Either they will lie about it (so what else is new?) or be extremely disappointed.

Mueller is likely to testify behind closed doors to the House Judiciary Committee, which will shed a lot more light on his motivation(s) in doing what he did with the information he gathered. Then there is the tape of the Flynn-Kisliak conversation that got Flynn fired (eventually) which a judge has ordered the Justice Department to release. So far, they have refused. We'll see if Barr can hold on to that position (which is a very odd one for an Attorney General to take, but of course Barr is a very odd Attorney General). The reason they don't want it public is most likely because it would show not only that Flynn talked openly with Kisliak about lifting sanctions, but that he also made clear that he was authorized to do so by Trump. Oooops! 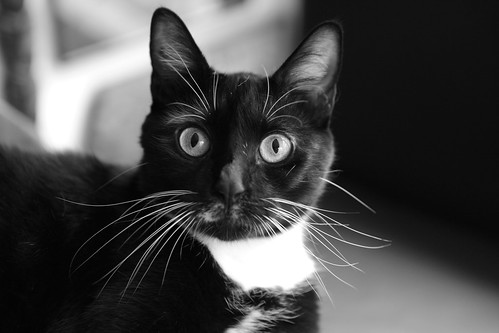 Kevin Flynn. Who me? Trafficking with the Russians? No. That's Mike.
(Image by Sam Howzit)   Details   DMCA

But supposing that Trump and his allies are indeed successful in fending off the results of the investigations (and there are more than just those of Mueller, e.g., Roger Stone will go on trial in October, unless Barr shuts that down, which he very well might, and there's that bunch of sealed indictments, sent off to other Federal jurisdictions), the release of vital documents, like his tax returns, and so on and so forth. And suppose the Democrats manage totally to screw up their chances to beat him, just as Hillary, with a big assist from Jim Comey, did.

What will the country begin to look like, very quickly? The word "fascism," which I have been associating with Trump for some time now (as have others as well, of course) comes to mind. First of all, Trump will continue to have his facilitators, like von Schleicher and von Papen, in the persons of folks like Lindsey Graham and Mitch McConnell. Neither like him much, but both as sticking close to him because they like his policies and certainly don't want the Democrats to be able to take over the whole government.

One way or another, the Right-Wing majority of the Supreme Court will quickly grow to 7-2 (if it doesn't get there already between now and Election Day, 2020). Even if he were so inclined, for whatever reason, John Roberts will thus not become any kind of "swing" on an otherwise evenly divided Court. The vast right-wing infestation of the lower Federal courts engineered by Tom McGahn and Mitch McConnell will begin to take hold. Rulings to date against Trump on both personal and governmental issues will begin to be quashed, and the courts will begin to positively support a wide variety of Trump initiatives of questionable Constitutionality. The Federal court system will be well on its way to being "fascistified" (there's new one for you[!]), just as Trump has been calling for since he entered the race for the Presidency in 2015. And of course, suppression of the independent judiciary is a key feature of fascism.

Another key feature of fascism is the suppression of the free media. It is unlikely that the Trumpublicans(tm) would, at the beginning at least, go after the media directly, by statute. But Trump just loves suing. And he has talked about suing the media for libel. Right now, it is very difficult for him to do so, most importantly under a famous 1964 Supreme Court decision, New York Times Co. v. Sullivan. It set a very high bar for success in such suits. A Trumpublicans (tm) Congress could write a new statute, which would then be upheld by the TrumpCourt (tm), making success in libel suits against the media much easier to achieve. Trump would have a field day, given to him by his Courts, and the independent media would disappear.

On the legislative side, after the reversal of Roe v. Wade by the TrumpCourt (tm), abortion would be outlawed nationally and thoroughly criminalized. A national "right to work law" would effectively kill the remaining, very weak trade union movement. What would be left of "Obamacare" would be repealed. The 40-year Republican battle to functionally repeal Medicaid would be won and Medicare would be significantly cut back. "The Wall" would of course be built.

As for indicting his enemies, which an unfettered Trump would be itching to do, of course the first up would be Comey, McCabe, and Mueller, while Manafort would be sprung at the first possible moment. As for Mike Cohen, if Trump could figure out a way to get around double jeopardy, Cohen would be first in his sights for further punishment.

All of this, of course (forgetting what would happen with foreign policy), is just for openers.

And finally, getting back to Trump's main legislative Republican facilitators, McConnell and Graham. Which, if either, would be von Schleicher, and which von Papen?

Note: The "tm" here is just a joke. No registration is being applied for.

Steven Jonas, MD, MPH, MS is a Professor Emeritus of Preventive Medicine at StonyBrookMedicine (NY) and author/co-author/editor/co-editor of over 35 books. In addition to his position on OpEdNews as a "Trusted Author," he is a Senior Editor, (more...)
Related Topic(s): Abortion; Democrats; Fascism; Fascist; Hindenburg; Hitler; McConnell-Mitch; Media; National Socialism; Nazis; (more...) Obamacare; Policies; President; Republican; Stalin, Add Tags  (less...)
Add to My Group(s)
Go To Commenting
The views expressed herein are the sole responsibility of the author and do not necessarily reflect those of this website or its editors.