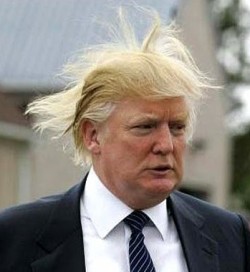 That walking hairflap has offered President Obama a $5 million donation to the charity of his choosing if the President will release details from his college transcripts and his passport.

"Trump made the offer Wednesday in a video posted to his Twitter account. He called Obama 'the least transparent president in the history of this country,' and said that by taking the deal Obama would satisfy voters' questions about his past. Trump drew broad publicity last year for questioning whether Obama was born in the U.S. and eligible to be president. Obama later released his long-form birth certificate showing that he was born in Hawaii in 1961. In the video, Trump said he was proud to have pushed Obama to release the birth certificate or 'whatever it may be.'" 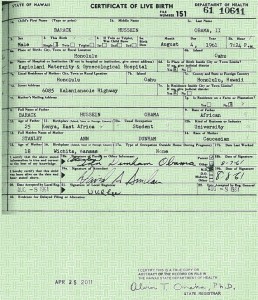 Somebody should counter The Donald with a offer to donate $10 million to the Teabagger Defense Fund for a glimpse at Mitt Romney's last 10 tax returns ... and Donald's natural hairline.

Will the coming election end the Birther Madness? Probably not, unless the President can turn himself into a 100% white guy. None of this 50-50 stuff -- too confusing for most Teabaggers.

"Trump has endorsed Republican Mitt Romney for president. Obama campaign spokeswoman Jennifer Psaki declined to comment on the Trump video, saying 'given Trump is one of his biggest supporters, this is a question best directed to the Romney team in Boston.'"

Calling Team Romney -- what say you of your latest loony supporter to launch a racist attack on the president? Williard's supporters are a surprisingly colorful collection, given their preference for pale, bland, milquetoast rubber-stamp republicans.

Kathy never expected a career in radio as a talk show producer. Born and raised in Atlanta, Georgia, Kathy was completing her nursing degree when in 2001 - in an emergency - she was asked to fill in as the producer of Mike's program. Within a few (more...)
Related Topic(s): Donald Trump; Obama; Republican; Teabaggers, Add Tags
Add to My Group(s)
Go To Commenting
The views expressed herein are the sole responsibility of the author and do not necessarily reflect those of this website or its editors.