Trump said a lot of things that will never happen. Here are my favorite lies: 1. I can be trusted because I cannot be bought; I am self-funded: Fact: 99% of his general race was funded by wealthy donors, such as Adleson, who got a reversal on Trump's "neutrality" towards Israel/Palestine for a mere $25 million. 2. I opposed the War on Iraq before the invasion. Fact: he is on record on the Howard Stern show saying he supported the war.....and only turned against it later when it turned sour. 3. There are 35 million illegal aliens; I will deport every last one! Fact: There are about 11 million (there are about 35 million legal immigrants) , down from 2008. of these, 173,000 are in in prison, mostly for non-violent offense such as lack of papers or drug possession. Using his own figures (35 million), this is .004% , compared to .91% for US citizens, of over 99% more US citizens in prison/jail. Using the actual figure of 11 million, the "illegals" have a .015% in prison....or about 97% lower incarceration/crime rates than US Citizens (source: US Bureau of Prisons).

Copyrighted Image? DMCA
4. The other day he said he would only deport the "criminals." that would be the 170,000 now convicted, 99% fewer than he originally said. 5. Today, he says he will deport 3 million illegal alien criminals, but there are only 170,000. Fact: you explain it! 6. The borders cities, he said, are very very dangerous and he praised his own bravery in visiting one: Fact: border cities are among the safest. Inland cities, with fewer "illegals" have far higher crime rates. Our largest border city (San Diego) year after year is our safest large city, with a murder rate nearly 40% lower than the national average. For instance, "Border cities get a bad rap as violent, but the Rio Grande Valley is extremely safe. Of the 24 Texas metro areas ranked by the FBI, Brownsville comes in dead last, with 240 incidents of violent crime per 100,000 people. Nearby McAllen comes in at #18, with 286 per 100,000. 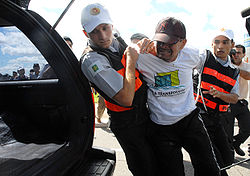 Things are closer to the middle of the pack in El Paso and Laredo, which place at #13 and #10, respectively. The murder rate in each city is low, at 1.4 and 1.5" texasmonthly.com based on FBI data. These murder rates in "the very very dangerous border cities" are 3-4 times lower than the US average of 6.2. Likewise in the most populous "illegal alien" state: Fresno, Ca has 9.2,, Stockton has 16.2; San Diego has 2.3. Digest that, when thinking of Trump's lies.

Fact: San Diego County maintains the third largest population of unauthorized immigrants in California and the seventh largest in the United States, according to a new report by the Migration Policy Institute. An estimated 205,000 unauthorized immigrants are living in the region, the Migration Policy report said. This is 7th largest in the nation. Yet, its murder rate is 2 times lower than the national average. Got it? The safest cities are the ones with the most "illegals" and Trump is lying (and knows it...but he also knows that the "poorly educated " that he loves are what he called in a 1999 interview "morons" (his name for people who are not rich). They are sheep with blind faith believing lies easily refuted.

Now, as for re-opening the 9/11 investigation, it's a lie. His first choice for top foreign policy adviser was James Woolsey, former head of the CIA, and the man, who hours after the WTC was demolished, was on TV claiming he had evidence (he's a fast worker) that Saddam was behind the attacks. This fits the script written by the Project for a New American Century by Woolsey and others planning (I sh*t you not) world domination (US hegemony) starting with wars on 7 Muslim nations in the middle East, starting with Iraq and going through Damascus to Tehran. Bush's choice as adviser and possible Secy of State is John Bolton,who last year wrote a NYTimes oped called: "Bomb Iran." So why would he choose a former CIA chief who wrote the script for the "new Pearl Harbor, needed to mobilize the public behind these 7 new wars and who was out front blaming it on Saddam, be chosen? You would have to ask Trump. But it is unlikely that Woolsey and others in the Bush team like NSA Hadley and UN Ambassador Bolton, would allow him to open up an investigation that would expose not only Bush,. Cheney, Rice, and Rumsfeld but themselves to criminal prosecution. Is Woolsey there to kill him if he tries? Woolsey did not choose Trump; Trump chose him. So it's just more bullshit.....originally said to smear Clinton. It isn't going to happen under Trump......it's just salesmanship, propaganda, deceit.

Copyrighted Image? DMCA
The problem with believing Trump is to know which side of his mouth you should listen to: his sheep listen to the side that panders to their bigotry and anger. These are his useful idiots, the "morons" who would vote for him '..even if I shot someone in broad day light on 5th Avenue." Total sheep. Trump has learned his trade well from the master whom he admits to having read. (Mein Kampf: "A Jew gave it to me.") His ex-wife said it was his bedside reading....and he has never denied it.

Related Topic(s): Anger; Criminal Aliens; Deportation; Immigrants; Mexicans; Murder; Population, Add Tags
Add to My Group(s)
Go To Commenting
The views expressed herein are the sole responsibility of the author and do not necessarily reflect those of this website or its editors.