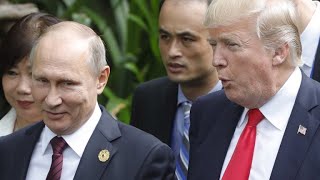 It's been confirmed Trump is to meet with Russian President Vladimir Putin in Helsinki, Finland on July 16, 2018.

The meeting has been in the works for some time now. Coupled with Trump's summit with North Korean leader Kim Jong-Un on June 12, it seems Trump is on his own unexpected diplomatic mission few if any saw coming.

But then there's the "Donald" is his ignitable way alienating allies in Europe dropping the US from the Iran nuclear deal, threatening countries they must end trade with Iran by November 1 or face US sanctions, earlier withdrawing from the Paris Climate Accord, recently initiating tariffs on trade with China and then his crazy policy separating children from their parents at the Mexican border-recently rescinded after a nationwide outcry that even the tone deaf Trump and his minions couldn't ignore.

It's all rather quixotic. Now there's none other than Trump's arch neo-con National Security Adviser John Bolton shown yesterday meeting Putin in Moscow apparently working out the final details of the Trump/Putin summit in July.

Chew on that one awhile. Considering Bolton's well known antipathy toward Putin and Russia he'd be the last to be in Moscow glad handing with Putin. But with this administration nothing is predictable beyond knowing Trump will tweet whatever reaction enters his head.

Let's face it. It is what it is. At least nuclear war seems averted for the moment so at least that's a good thing.

Environmental denial remains with Trump and his coterie of followers that have drunk the Kool-aid so that remains as the 800 pound gorilla in the room as no real plan to deal with global warming and the coming environmental catastrophe that's looming at this point.

So...be glad for small favors in the form of Trump's diplomatic initiatives.

The latest "news" from the MSM focuses on Supreme Court Justice Anthony Kennedy resigning from the bench at the end this term with Dems and liberals becoming apoplectic over who Trump might nominate.

The idea Kennedy represents some sort of modifying presence on the Court is pure fantasy. Not when one considers he was there in 2000 along with his four other Neanderthal colleagues handing "Dubya" Bush the presidency and the one who wrote the majority opinion in favor of "Citizens United" in 2010 that brought an avalanche of corporate and unaccounted for dark money into the electoral process that all but confirmed we have a plutocracy of oligarchs disguised as a democracy. Kennedy even declared he saw no evidence of corporate influence corrupting the electoral process. How's that for chutzpah.

SCOTUS is in the hands of the reactionary right wing and probably will be for the next generation.

Thinking about it domestically it's hard to imagine anything of a progressive nature happening on the national scene. Forget Trump being impeached. The Repubs in Congress won't let it happen.

However on the state and local scene Seattle approved a $15 dollar minimum wage and Maryland defeated all attempts to bring fracking into the "Free State".

"Life" has a way of existing despite all attempts to kill it. Maybe there's hope in that.

Retired. The author of "DECEIT AND EXCESS IN AMERICA, HOW THE MONEYED INTERESTS HAVE STOLEN AMERICA AND HOW WE CAN GET IT BACK", Authorhouse, 2009
Related Topic(s): Meeting; Trump And Putin, Add Tags
Add to My Group(s)
Go To Commenting
The views expressed herein are the sole responsibility of the author and do not necessarily reflect those of this website or its editors.