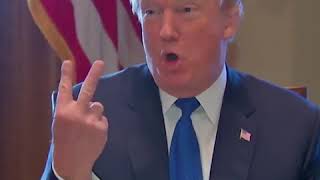 Trump Throw A Childish Hissy Fit In Press Briefing Because His Candidate Lost (VIDEO) YouTube has Demonetized All of our videos, To help support World Source Media, Please visit worldsourcemedia.com and become a subscriber to our site....
(Image by You Tube)   Details   DMCA

The shooting began while Trump was at his golf club, and after what his own staff admitted was a disastrous debacle visiting the victims, Trump is now slinking back to his club to golf even more. For any other president, this would be the height of a scandal. Yet honestly, in Trump's case, the victims, along with the entire nation, would really have just appreciated it if he never left his club.

Instead, Trump traveled to Dayton and El Paso to wreak havoc. In lieu of providing comfort to the victims, he used this opportunity to spout out the false claim of how he can pack an arena. Then he attacked the media, Democratic public officials in Dayton, and Democratic presidential candidates while visiting the hospital victims. Sickeningly, the White House tweeted that Trump was treated "like a rock star." Because apparently, we live in North Korea now.

The victims in the El Paso hospital did not want to meet with Trump, but he demanded his photo op. So he had a patient brought back who was discharged -- a two-month-old baby whose parents died shielding him from one of his racist followers -- just so he could strike a ridiculous "thumbs up" pose with the now orphaned baby.

The doctors said Trump "lacked empathy." That would be an understatement.

He is a f--king monster.

The Washington Post reports that Trump threw a giant hissy fit on Air Force One because news cameras had not accompanied him in the hospital, causing coverage of the visit to be dominated by his foes.

According to reporters John Wagner and Josh Dawsey, the president had wanted "pictures and video released immediately" and "asked aides to go defend him," complaining that he had not gotten sufficient credit for his response to the shooting.

That's right. Because shooting victims weren't the ultimate victim in all of this -- it was Trump's ego.

I can't imagine why victims didn't want to be used as props. Too bad the baby didn't have a choice.

Trump was so distraught about the bad coverage he was getting that he apparently demanded that a campaign video be thrown together, complete with cheesy music, which was comprised almost entirely of shots of him mugging for the camera. I can't believe he did this, nor can I believe he thought this would help his image:

Related Topic(s): Immigration; Killing; Shootings; Trump Anger; Trump Bully In Chief; Trump Lack Of Dignity, Add Tags
Add to My Group(s)
Go To Commenting
The views expressed herein are the sole responsibility of the author and do not necessarily reflect those of this website or its editors.