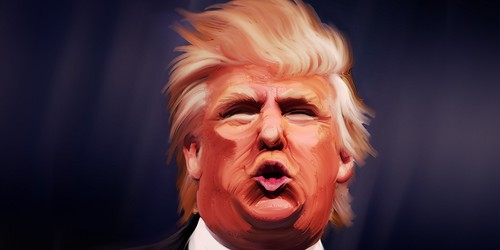 On Tuesday, Donald Trump did something that Donald Trump does everyday -- lie on Twitter. But something unusual did happen in response. After 52,000 tweets, Twitter decided to actually call out one of Trump's persistent lies. Specifically, Twitter added "get the facts" tags to a pair of Trump tweets about vote by mail. Those facts show that Trump's claims about vote by mail leading to fraud, are themselves fraudulent. Clicking the Twitter-added link takes readers to a fact-checking page detailing ways in which Trump's statements about voting by mail are absolutely wrong. False. Lies.

And, as might be imagined, Trump has responded on Wednesday morning with a sputtering fury in which he's accused Twitter, and all of social media, with "silencing conservative voices." And with "interfering in the 2020 election." And with "stiffing free speech" (with quite a few more capital letters involved). Trump is not only blasting Twitter, all social media, and the fact checkers, he's threatening to either regulate Twitter or to shut them down completely.

The tags that Twitter added to the pair of tweets are the first sign that Twitter is trying to hold Trump to anything approximating the rules that face ordinary users of the service. Trump's eruptive response doesn't just include a threat to "strongly regulate" social media sites or "close them down," but claims that Twitter's actions are "stifling free speech" and that Trump "will not allow it."

The tags that Twitter added to the pair of tweets are the first sign that Twitter is trying to hold Trump to anything approximating the rules that face ordinary users of the service. Trump's eruptive response doesn't just include a threat to "strongly regulate" social media sites or "close them down," but claims that Twitter's actions are "stifling free speech" and that Trump "will not allow it."

Twitter is, of course, a private company. It's not subject to claims of First Amendment violation, because it's not a government actor. The government can't either limit speech on a private platform, or require that the platform carry particular speech. Twitter is also not a regulated public forum, because numerous court rulings dating back decades have made a firm definition of those forums that makes them closely aligned to town halls.

On the other hand, as a public official, Trump does have regulated responsibilities concerning speech. He has already lost one fight over Twitter, when multiple court rulings made it illegal for him to block Twitter users who posted replies to his tweets that Trump didn't like. Both a district court and appeals court ruled that Trump could no longer block Twitter users -- thanks to a lawsuit brought by former Daily Kos judicial affairs editor Rebecca Pilar Buckwalter-Poza.

There's no doubt that Trump can issue regulations to demand that Twitter never add a comment to his post, or block any "conservative" throwing around lies and hate speech. Among others, FCC commissioner Ajit Pai would likely hop at the chance to craft such a regulation. But it's almost equally certain that the regulation could never be enacted. Trump wouldn't be writing a regulation; he'd just be drafting a headline for his latest fundraising appeal.

And at the bottom of this particular tirade is the power that fuels so many of Trump's biggest lies -- projection. In his Tuesday evening fuming over Twitter's tags, Trump claims that social media platforms attempted to intervene against him in the 2016 campaign. In fact, it was thousands of Russian bots, hundreds of genuinely fake media sites, detailed analysis courtesy of Cambridge Analytica, direct cooperation from Facebook's targeted ad services that turned social media into Trump's biggest tool in 2016.

Since then, Republicans haven't backed away. They're still at it. Dozens of fake "local news" sites have popped up across critical swing states, and the whole "reopen" protest movement is a carbon copy of the Russian playbook from 2016. Trump can't count on uncritical New York Times headlines to carry all his lies to the public -- he needs Twitter. That platform, and the rest of social media, are at the heart of the right-wing propaganda engine that fuels anger, divisiveness, and racial hate. If the social media sites didn't exist, Trump's team would have to build them ... and they absolutely will. As soon as they've gotten all they can from the existing platforms.

Related Topic(s): Propaganda; Trump Against Democracy; Trump Attacks Media; Trump Bully In Chief; Trump Ego; Trump Twitter Freak, Add Tags
Add to My Group(s)
Go To Commenting
The views expressed herein are the sole responsibility of the author and do not necessarily reflect those of this website or its editors.