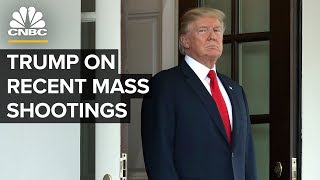 As usual, the press is responding with the required dose of cliche's about tragedy and uniting as a community, but every serious political issue is buried.

What are these issues?

First, the massacres in Gilroy and El Paso occurred in the context of the open incitement to violence against immigrants and racial minorities by Trump. Although Patrick Crusius, the attacker in El Paso, made the decision to acquit Trump in his statement published online, there is no doubt that he and other individuals of fascist tendency are acting with full knowledge that they have the Government sympathy.

It was Trump who declared during his 2016 campaign that he would pay the bail of any supporter who violently attacked a protester, who urged the police to "not be too gentle" with the suspects arrested and who gave a pardon to the sheriff Joe Arpaio later that he was convicted of judicial contempt in relation to the illegal detention of immigrants. At a campaign rally just two months ago, Trump raised the question of how to deal with refuge seekers at the border, smiling from ear to ear when a supporter shouted, "Shoot them!"

During the last month, the US president has intensified his incitement of violence. After Trump's attack on the city of Baltimore, portraying her as a hell infested with rats and crime in which "no human being would like to live," the WSWS noted that "Trump is playing with fire and knows it." The president and his advisers estimate that "their explicit provocations will intensify an already unstable political environment, with immense potential to generate violence and create conditions that will allow it to invoke dictatorial powers to maintain the 'law and order.'"

Crusius detailed his motives in a four-page manifesto published online. He begins paying tribute to the mass murder of Christchurch, New Zealand, who murdered 51 people in two Muslim mosques earlier this year. Then he states, in a language that echoes Trump's countless campaign rallies, "This attack is a response to the Hispanic invasion of Texas. They are the instigators, not me. I am simply defending my country from the cultural and ethnic replacement that an invasion entails."

However, it's not just Trump's prompts. The El Paso assassin expresses the emergence of a distinctly fascist trend in the United States, which combines virulent racism with anti-immigrant hysteria, while appealing to social unrest against the capitalist system.

The reference to "replacement" in the manifesto is a sign of the fascistizing character of the Crusius manifesto. The white supremacists who scored in Charlottesville, Virginia, in 2017 sang "the Jews will not replace us (and Trump said "many good people" participated). A similar language is being used by European neo-Nazis and by the attacker Brenton Tarrant in New Zealand, which claims that there is a conspiracy of large corporations and/or Jews to replace whites in Europe and the United States with immigrants from Asia , Africa and Latin America.

The statement of the attacker makes a demagogic appeal to social unrest such as unemployment, low wages, large student debt and the fall in living standards of the working class, blaming all these phenomena on an alleged conspiracy of the US employer to replace to high-wage American workers for imported and cheap labor. This is also characteristic of fascism, which seeks to provide a nationalist way out of social divisions within capitalist society.

It is not possible to achieve any understanding of this phenomenon without examining the role that the Democratic Party has played in legitimizing racialist politics and obsessed with races in the United States.

Historically, the fight against racism has always involved exposing its underlying illegitimacy. Race is not an authentic category of social analysis, but an anti-scientific construction whose bankruptcy is increasingly obvious under conditions in which tens of millions of children and young adults were born from "mixed" couples.

The politicians of the Democratic Party and the pseudo-leftist forces that serve as their political mills are just as uncompromising as the fascists like Crusius in which there must be separate and distinct races of "blacks" and "whites." Stacey Abrams, the defeated candidate for governor of Georgia who has assumed an increasingly prominent stature in the Democratic Party at the national level, proclaimed that there are "intrinsic racial differences" while denouncing, in an article in Foreign Affairs, the policy based in "the general category known as 'the working class.'"

The New York Times , which has relentlessly promoted race policy and racial divisions, referred in its news report on the murders in El Paso to the "afflicted white men" who "have resorted to mass murders in service of the hatred against immigrants, Jews and others whom they perceive as threats to their white race." The Times refers to the "white men" and the "white race" without quotes, accepting the legitimacy of this categorization and promotes the claim that Trump, by promoting racism, is merely articulating the feelings of "white men."

Patrick Martin writes for the World Socialist Website (wsws.org), a forum for socialist ideas & analysis & published by the International Committee of the Fourth International (ICFI).
Related Topic(s): Fascist; Manifesto; Political Mudslinging; Racism; Terrorism; Tragedy, Add Tags
Add to My Group(s)
Go To Commenting
The views expressed herein are the sole responsibility of the author and do not necessarily reflect those of this website or its editors.