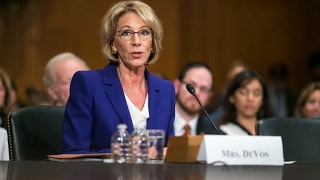 The tax cut legislation backed by the Trump White House is more than just a trillion-dollar windfall for the super-rich. The bills passed by the House and Senate in different forms will now be reconciled in a special conference, but both versions contain provisions that will devastate public education while promoting the growth of private and religious schools.

School districts across the country have warned that without the federal deductions to cushion the impact, it will be much harder to maintain existing state and local taxes to support public schools, let alone win the approval of millage increases. If state and local taxes are lowered to offset the loss of the federal deduction (or simply frozen at present levels, which means a reduction over time in real terms), the result would be a sharp fall in funding for public schools.

In other words, the Trump tax cut could have as devastating an impact on education as the 2008 Wall Street crash. The deep recession that followed the crash led to huge spending cuts by state and local government, resulting in the elimination of 366,000 school jobs during the ensuing six years. The Obama administration's "stimulus" program did little or nothing to offset these drastic cuts.

The tax bill also prohibits a form of local school funding: tax-free "advance refund bonds," which allow school districts to refinance debt when interest rates are low, as they are now. This is simply a handout to bondholders, most of whom are wealthy investors, at the expense of the public schools.

The political goal of undermining and ultimately destroying public education was reflected in the passage of an amendment to the Senate bill, sponsored by ultra-right Texas Republican Ted Cruz, which allows holders of tax-free 529 accounts, originally set up to provide for college education, to use the money for private and religious elementary and secondary schools.

This is both a boon to the wealthy and a blow to public education: those who can afford to contribute up to $10,000 a year to 529 accounts will be able to use the money tax-free for private and religious school tuition. At the same time, working people who pay state and local taxes to support public schools will not be able to take a tax deduction on those payments.

In a statement to the press, Sasha Pudelski, assistant director for policy and advocacy at the American Association of School Administrators, said, "It's crazy that we're eliminating the ability of people to deduct their state and local taxes that go directly to local services, including schools... while at the same time providing a $10,000 incentive for folks to send their kids to private schools."

What seems obviously crazy to school professionals, however, is perfectly logical to millionaire senators who represent the interests of the financial aristocracy. In the wake of the passage of the tax bill through the Senate, there have been a number of statements of open class hatred spewing from the mouths of top Republican leaders.

Charles Grassley, chairman of the Senate Judiciary Committee, defended the sharp reduction -- or outright elimination -- of the estate tax on inherited wealth. "I think not having the estate tax recognizes the people that are investing," he told the Des Moines Register. "As opposed to those that are just spending every darn penny they have, whether it's on booze or women or movies."

Orrin Hatch, chairman of the Senate Finance Committee, who played a central role in drafting the tax legislation, made similar comments defending the Senate's failure to reauthorize the Children's Health Insurance Program, which extends Medicaid coverage to 9 million children in low-income families. "I have a rough time wanting to spend billions and billions and trillions of dollars to help people who won't help themselves, won't lift a finger and expect the federal government to do everything," he said, referring to poor children, not the idle rich.

The attack on public education is veiled and not explicit in the language of both the House and Senate versions of the tax legislation. But the next round of congressional action will include public and open attacks on critical domestic social programs, justified, according to Trump and the congressional Republicans, by the very deficits they have aggravated through tax cuts for the wealthy.

Patrick Martin writes for the World Socialist Website (wsws.org), a forum for socialist ideas & analysis & published by the International Committee of the Fourth International (ICFI).
Related Topic(s): Education Funding; Public Education; Public Schools; Trump Cruelty; Trump Tax Bill, Add Tags
Add to My Group(s)
Go To Commenting
The views expressed herein are the sole responsibility of the author and do not necessarily reflect those of this website or its editors.