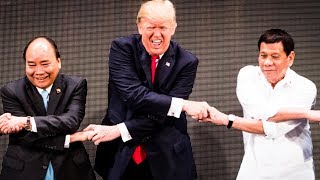 It was almost painful to look at. That handshake. The apparently traditional one in which the world leaders attending the Association for Southeast Asian Nations (ASEAN) conference line up side-by-side, reach their arms across their bodies and shake hands with the persons next to them. Right hand to left side, left hand to right side. A little unorthodox, but heavy on symbolism.

The dotard-in-chief at first couldn't figure out the logistics of where his hands should go and whose hand to shake. After flailing around for a few seconds, he finally got it. Then came the painful part. As he reached across his body for the hands of Vietnamese Prime Minister Nguyen Xuan Phu and Philippine President Rodrigo Duterte, Trump grimaced as if in serious pain.

It's obvious as you look at the photo that all the other participants are relaxed and smiling. Trump is straining, trying desperately as photographers continue to snap to look as if he's smiling. The man can barely manage to hang on to Nguyen and Duterte.

All the stories I saw on the handshake called it "awkward." Well, sure it was awkward. We're used to awkward from dotard. But it was only the photographers who reported that he was grimacing, not smiling, as if it were a reach too far across a flabby, out-of-shape body.

Look, as far as I'm concerned the question of whether Trump is fit mentally, emotionally, intellectually, morally or ethically to be president was answered convincingly during the 2016 campaign and has been reinforced every day he has been in office. He's not. Yet for some reason we're still debating this. I'm tired of restating the obvious, which is why, I think, the handshake photo struck me.

In addition to all the above, the man is also physically unfit to be president. He actually winced as he reached for Duterte's hand, which ought to be a fairly unchallenging physical feat.

Trump is obviously overweight. During the campaign his "doctor" reported Trump's weight as 236 and height as 6 foot 3. A lot of people say he's really 6 feet 2 inches tall, but that would change his Body Mass Index, moving him from merely overweight to obese and, well, that would simply be unacceptable.

Like exercise. Trump has famously said he doesn't exercise because he believes everyone has a "finite" supply of energy and exercising uses it up. What can you expect from a guy who stared at the sun during an eclipse.

This is not nit-picking, people. The man is 71 years old and lives on a diet of fast food and red meat. He sleeps three to four hours a night. He watches a lot of television. He prefers to skip breakfast, but does wash his hair and check Twitter. He has one of the most pressure-filled jobs in the world, yet, unlike other presidents, he has not had a physical exam since taking office, at least not that we know of.

His only physical activity is golf, which is not particularly strenuous, especially since he rides his golf cart everywhere, including onto the green. (He also used a golf cart in Saudi Arabia while other dignitaries walked because he was "exhausted.")

In a sense, Trump's blithe disregard for his physical health is in the same vein as his demonstrated lack of interest in history, geography, economics, science, the Constitution, diplomacy, appropriate social behavior, the truth, business ethics, common courtesy and how government actually works. Add your own to the list.

The point is -- and his loyal supporters who see the emperor well-clothed ought to really care about this -- if he can't manage his own personal health with all the imaginable resources in the world at his call, how can he be relied on to manage America?

Let me be clear. With Pence and Ryan in the bullpen, I'm not especially eager to have some physical ailment remove Trump from the Oval Office. (Again, one wonders why his supporters don't care.) Actually, I see his denial of his basic health needs -- and his secrecy about his physical condition -- as just another symptom of his emotional unfitness for office. That should disqualify him. It isn't so much that he doesn't care as it is that he doesn't seem to realize he should care, at least for himself and his supporters and family.

If he really wanted to make America great again, the dotard would set an example of something positive he's doing. Take a walk. Eat some vegetables. But he's got nothing. He body shames people, especially women, as if he has never looked in a mirror. Or, psychiatrists would say, maybe because he has looked in a mirror. One way or another, it's always about him and whatever the subject is he alway thinks he's the smartest person in the room. It's the kind of attitude people like Vladimir Putin thrive on. That Republicans have allowed it to continue and sought to exploit it will be to their everlasting shame.

Here's just a small example of how Trump's disregard for his health and his responsibilities does not make America great again: A couple in Jacksonville, Fla., went to their elementary school to see their son receive a National Physical Fitness Award. Being bright as well as fit (he could probably handle the ASEAN handshake blindfolded), the boy immediately noticed the certificate was signed by former President Barack Obama, not Trump, even though it was dated May 23, 2017.

Related Topic(s): ASEAN; Diet; Energy; Fitness; Golf; Health; OVERWEIGHT; President; Republican; Trump Ego; (more...) Trump Health; Unfit, Add Tags  (less...)
Add to My Group(s)
Go To Commenting
The views expressed herein are the sole responsibility of the author and do not necessarily reflect those of this website or its editors.