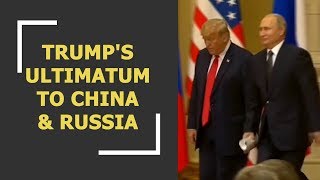 President Trump saying Russia and China "need to come to their senses" regarding their nuclear arsenals or "we will build it up", the US nuclear arsenal.

You know we've reached an Orwellian state of affairs in the US when President Trump, referring to both Russia and China, need to "come to their senses", regarding their nuclear weapons arsenals or ..."we will build it up", referring to the US nuclear arsenal.

Instead of further reducing the US nuclear arsenal Trump-and Obama before him-intends to increase the arsenal under the pretext Russia hasn't adhered to the INF, Intermediate Range Nuclear Forces Treaty and China though not a signatory to the treaty is also expanding its nuclear arsenal, forcing the US to withdraw from the treaty.

Under the 1987 INF treaty signed by President Reagan and Soviet Premier Mikhail Gorbachev thousands of intermediate range nuclear missiles were destroyed by both sides. Now Trump wants to scrap the treaty and head in an opposite direction expanding rather than reducing the US nuclear arsenal. What this does only heightens the possibilities of their use.

Does Trump and his coterie of advisors, particularly national security advisor John Bolton disregard MAD mutually assured destruction? The idea clearly understood by the US and USSR during the cold war if either initiated a nuclear first strike the other would retaliate and annihilate the other.

Recently Russian President Vladimir Putin has stated unequivocally Russia will not initiate a nuclear first strike but would retaliate if Russia were attacked with nuclear weapons.

Meanwhile the US says everything is on the table including a nuclear first strike.

So when a US president says others meaning Russia and China need to "come to their senses" that is the supreme oxymoron because it is the US that needs to come to its senses.

It is US provocations that force Russia and China to take steps to defend themselves. It was the US that dismissed the 1989 verbal agreement between Gorbachev and the Bush senior administration that NATO would not move "one inch eastward" if East and West Germany were allowed to reunite. Now NATO's expansion sits on the doorstep of Russia under the guise of maintaining European security despite the fact the Soviet Union ceased to exist in 1991 thereby undermining the very reason for NATO's existence, repelling a Soviet invasion of western Europe. Meanwhile the US Navy patrols the South China Sea under the guise of maintaining "freedom of navigation" and in the last two days the US has sent warships through the Taiwan Straits. China sees these intrusions as US provocations directed at them.

The fact is the US needs "enemies", real or contrived to justify its $trillion in yearly defense spending. Without "enemies" there's no justification for the bloated defense spending. So the last thing the US wants is world peace. That would mean severely cutting defense spending and probably the elimination of all nuclear weapons.

The central problem in the US is the military/industrial/political/security/surveillance complex with its tentacles deep into every significant institution in the country. It is beyond reform. It is irredeemable. It must be replaced root and branch.

I believe the people know this instinctively but don't know how to change it.

Sure there are protests and demonstrations by individual groups. But the focus is on their particular issue whether its war, climate change, abortion rights, Trump, Citizens United, the Kavanaugh nomination to SCOTUS, et al.

These protest groups operate separately. They need to be brought together and act collectively. They also focus on the symptom-their issue be it war, climate change-rather than focus on the disease, which is the ruling elite. The ruling elite reign with impunity, profit enormously from war, dismiss climate change regulations which would reduce their profits, are never held accountable, buy the electoral process to get their sycophants elected to enact the laws, regulations, oversight and enforcement to benefit the elite underwriters.

Are they not the billionaires, Wall Street Exec's, major defense contractors, heads of the major energy corporations, the corporate MSM, Silicon Valley, generals and admirals, the heads of the CIA, NSA, FBI, the FED, Congressional leadership-otherwise referred to as the "deep state"?

Retired. The author of "DECEIT AND EXCESS IN AMERICA, HOW THE MONEYED INTERESTS HAVE STOLEN AMERICA AND HOW WE CAN GET IT BACK", Authorhouse, 2009
Related Topic(s): Russia And China; Russia Bashing; Trump Foreign Policy; Trump Threats; Weapons, Add Tags
Add to My Group(s)
Go To Commenting
The views expressed herein are the sole responsibility of the author and do not necessarily reflect those of this website or its editors.