Some say this could be just another dog and pony show by Trump and Fox. 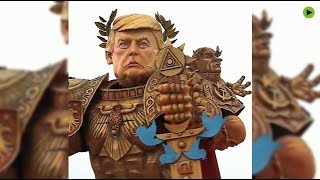 America's bombastic, and usually lying, president complains over and over that Fox News no longer works for him.

"Fox isn't working for us anymore," Donald Trump says in one of his usual tsunami of Twitter "tweets."

"We have to start looking for a new News outlet," he adds. "The new Fox News is letting millions of great people down."

The response by Fox?

Some say this could be just another dog and pony show by Trump and Fox.

"Not for nothing was Donald Trump inducted into the WWE wrestling hall of fame in 2013. The man knows how to stage a fake fight -- like his current brawl with the Fox News Channel," says media writer Jack Shafer of Politico.

"It's possible that Trump is once again laying the groundwork to start his own, Foxier than Fox TV channel or conservative news website annoyed to have his 2016 campaign plan interrupted by a presidency. But it's far likelier that this is all make-believe."

Trump so adores Fox that he's peppered his administration with former Fox News staffers, and five of his former employees have moved on to jobs at Fox or its parent company. Just recently, former White House press secretary Sarah Huckabee Sanders, among the most loyal of all Trumpies, took a job as a Fox News contributor.

Trump's faux-fight with Fox is designed 1) to add drama and excitement to where there is none; 2) make him the primary focus of events; and 3) temporarily complicate the story-line so viewers keep watching. Fox benefits from Trump's periodic attacks (remember when he boycotted one of Fox's 2016 presidential debates because it wouldn't dump Megan Kelly from the broadcast). They make the channel look like it's standing up to the president, and Fox ends up looking more independent and credible.

Is it possible to make Fox look either independent or credible?

We doubt either is possible. Watch the Showtime series, "The Loudest Voice," about how Roger Ailes took time from molesting female staffers to turn Fox into a right-wing shill operation that is better called "faux news."

Related Topic(s): News Media; Sex; Trump Attacks Fox News; Trump Attacks Media As Enemy Of The People, Add Tags
Add to My Group(s)
Go To Commenting
The views expressed herein are the sole responsibility of the author and do not necessarily reflect those of this website or its editors.