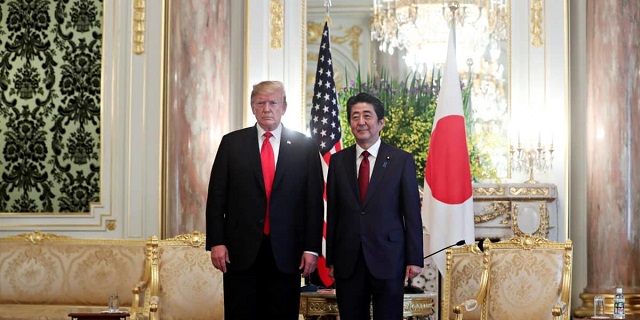 Donald Trump chose to spend the Memorial Day weekend hobnobbing with Japanese Prime Minister Shinzo Abe, a man who consistently honors his nation's dead war criminals from World War II. Make no mistake about it, Abe is a right-wing nationalist and that is what makes him attractive to the racist Trump.

Abe has denied that Imperial Japan forced women into sex slavery during the war years. Abe's denial of the use of "comfort women," which included many Koreans, earned him a double-barreled rebuke from South and North Korea.

Abe also declared that the Japanese puppet state of Manchukuo was not a puppet state. Abe and Trump share their own views of history, which, of course, deny simple reality.

Steve Bannon, Trump's version of Nazi propagandist Joseph Goebbels, considers Abe to be the first "nationalist" to win an election in a democracy. Bannon has also declared that "Prime Minister Abe was Trump before Trump."

Abe has had no problem visiting the Yakusuni Shrine, where some of Japan's most heinous war criminals are buried. The Trump administration, acting like the puppet state of Manchukuo, has failed to join South and North Korea, China, Taiwan, Singapore, the Philippines, and other World War II Asian Allied countries in condemning any honors for Japanese war criminals, whose victims included a number of American military and civilian personnel.

It may be perfect normal for Trump to eschew Memorial Day observances in the United States to pal around and go golfing and attend a sumo match with Abe. Because it is only normal when one considers that Trump is not a true American but a dictatorial leader for his neo-Nazi and white supremacist followers. In Japan, Trump sees a people who are "honorary Aryans." That is what Adolf Hitler called them and how they were treated in apartheid South Africa.