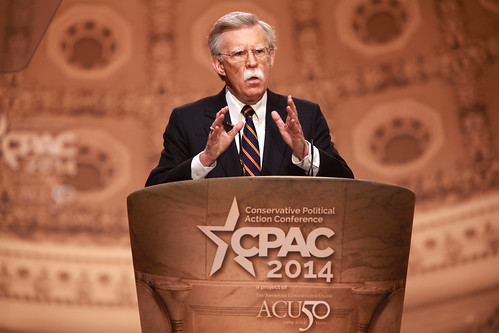 John Bolton, back from the dead with his neocon ideology
(Image by Gage Skidmore)   Details   DMCA

John Bolton, the man named this past week by President Trump to be his new national security advisor, is like that rotting corpse of the torturing rapist local yokel that erupts from the water at the very end of the movie "Deliverance," returning to remind its former victims of the horrors they had endured earlier and thought they'd finally rid themselves of.

One of the most bloodthirsty members of a gang of war-mongering neo-conservatives (almost all, like him, having no military experience themselves), who ran foreign policy during the Bush/Cheney administration, Bolton is a man who for years has been pushing for an imperial US policy to combat domestic economic decline. According this numbskull notion, Washington should attempt to maintain US primacy in the world affairs through force of arms, picking fights, starting wars, overthrowing governments and playing existentially risky games of chicken with nuclear powers like Russia and China. He and the wacko ideology known as neoconservatism, have returned with Bolton as a National Security Advisor, in this case to advise a president who thinks nuclear weapons are meant to be used.

Now I'm not one who thinks that military experience should be seen as some kind of prerequisite, much less a positive attribute, for appointment to a top federal post, even when that post has to do with military affairs or foreign affairs. Certainly a well-educated and thoughtful person, male or female, with no military experience, could do a better job running the Pentagon, the State Department -- or the National Security Council -- than a host of veterans of those posts who boasted rows of medals and colorful honors on the uniforms they either wore or kept as souvenirs in their closets.

That said, when someone like Bolton, who is a fanatic warmonger, has repeatedly advocated "pre-emptive" war as the go-to option for dealing with an international dispute, and is ready at the slightest assertion of independence on the part of any foreign power to call for bombing and for sending tens or hundreds of thousands of US troops into harm's and harming's way, I would insist that such a person, before being placed in a position of significant power and influence in the US government have had, as a bare minimum, at least some actual experience with combat. Instead we have an apparently perfectly healthy 69-year-old nut-job who turned 18 in 1967, right at the height of the US war against Vietnam, but who, despite being an ardent supporter of that war, used student deferments and who knows what other slippery excuses to avoid fighting in it, now being made Trump's latest top advisor on issues of war and peace"

Related Topic(s): Iran; National Security; Neocons-PNAC; Neoconservatives; North Korea; People John Bolton; Trump Draft Dodger; Trump Foreign Policy, Add Tags
Add to My Group(s)
Go To Commenting
The views expressed herein are the sole responsibility of the author and do not necessarily reflect those of this website or its editors.