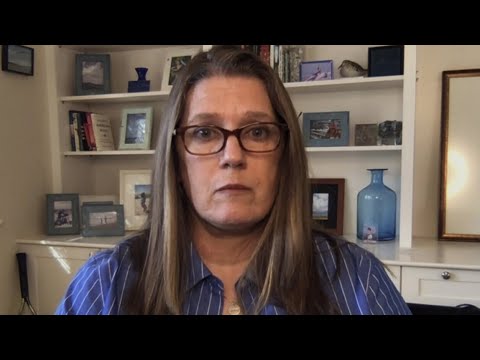 Many American families have their dysfunction. But in only one contemporary American family has the racist, misogynistic, ignorant blowhard uncle become the president of the United States. What is that like? Well, we don't have to guess. Because Mary L. Trump, the niece of Donald Trump, has written a bestseller about the horrific family environment that produced him. And this week she talked to Mother Jones about her uncle, her book, and how she came to write it.


After the Trump family went to court to stop the book -- and lost -- it was published last week and has reportedly sold a million copies. This memoir/psychological dissection, Too Much and Never Enough: How My Family Created the World's Most Dangerous Man, is a harrowing account of a man and a clan shaped by ego, rivalry, the pursuit of wealth, and profound pathology. Mary Trump's depiction of her uncle as a broken human being -- broken by his father, Fred, a ruthless patriarch with sociopathic traits -- is more explanatory than revelatory. She doesn't show us a Trump we haven't already seen. But she explains how and why he became a person more concerned about his TV ratings than the deaths of 140,000 fellow Americans.

I have a bit of a history with Mary Trump going back to 2016. Shortly before Election Day that year, I tracked her down. Throughout the campaign, she had practically no presence within all the stories about Donald Trump and his family. I hoped that she could provide information on him, the family, and their finances. After all, she had been involved in two bitter lawsuits against Trump and his siblings -- one over the disposition of Fred's estate and one challenging the decision of Trump and his siblings to cut off health insurance for Mary and her brother's families. (Her brother had an infant son at the time with a serious neurological disorder that resulted in tremendous medical bills.) Mary returned my call, expressed her horror at the prospect of her uncle becoming the most powerful man in the world, and explained that Fred, with Donald, had raised a mini-me sociopath. Donald Trump was not the most evil man in the world, she remarked to me; Fred was. But she said she could not speak on the record about any of this. (She has now given me permission to reveal our communications from that time.)

I chased Mary as a source for months and years, sensing she had much to share. I never persuaded her to go public. But now she has done so, and as her book has become a publishing sensation, I was finally able to talk openly with her. And I could ask her why she thanked me in her acknowledgments.

Explaining why she did not come forward at the time of the 2016 election, Mary noted in our interview, "I didn't feel it would make a difference." She believed she didn't have that much to offer and would be dismissed as a disgruntled relative still upset over being screwed during the battle over Fred's estate. She was also fearful of retribution from the Trump crew: "They're very vindictive people." She explained that she had forgotten that within the records of her lawsuits were loads of documents detailing Trump family finances. It was when the New York Times came knocking in the spring of 2017, in search of this material, that Mary realized she possessed significant information related to Donald Trump. After persistent coaxing from a Times reporter, she retrieved the material from her lawyer's storage facility and handed it over to the newspaper. About a year later, the Times, using these documents, produced a blockbuster report showing that Trump and his family had committed fraud to avoid paying hundreds of millions of dollars in taxes. (The story also revealed that Trump had received about $413 million from his father, far more than the mere pittance of a $1 million loan that he had claimed.) Mary's involvement with this project got her thinking: She did have something to say about Trump and her family. Soon she was contemplating writing a book.

In the interview, Mary, who has a PhD in clinical psychology, discussed her main thesis: Fred Trump was a "straight-up sociopath" who psychologically destroyed his oldest son and her father, Freddy, who wanted to be a commercial pilot rather than take over the family real estate business, and Donald Trump was permanently warped by witnessing this abuse and by other dysfunction within the family. Donald, Mary said, "learned"in order to be safe, in order to protect himself from my grandfather's cruelty, he needed to make himself in his dad's image, which I think was at the expense of his humanity. My grandfather had no redeeming characteristics...and [Donald Trump] no longer does." She added that there "was a point [Trump] wasn't so cruel, not so deliberately divisive."

One Trump family mystery involves a 1927 New York Times story that reported Fred Trump was arrested at a KKK rally and march in Jamaica, Queens. The article didn't say why Fred was detained and gave no indication if he had been there as a supporter or opponent of the KKK. When I asked Mary about this, she replied that she never heard this matter discussed within her family, but she added, "I have no doubt which side he would've been on." Fred, she explained, was "quite anti-Semitic," and, as she has said elsewhere, the n-word was routinely used within her family circle.

She also shared her view that Donald Trump inherited his father's bigotry. "He's racist," Mary said of her uncle. "It has to be said honestly and straightforwardly."

I asked Mary if she could explain Donald's affinity for Vladimir Putin and other authoritarian rulers. And she could: "I think he sees in somebody like a Putin or a Kim Jong Un or a Duterte or an Erdoğan a person who has a lot of power and by associating with them it sort of confers on him that aura of strength and invincibility. And who cares what that leads to? Concentration camps in China. Or disappearing people. If he's associated with that [power], then it reflects on him."

So could she answer for me a question that I've pondered for years: Does Donald Trump believe his own lies? After all, does Trump truly think he is the smartest guy of all time, that he knows more than the generals, that he's been more right about the coronavirus pandemic than anyone else, that his polls are great, that he has achieved more than any other president, and blah, blah, blah? "Very often he is lying to himself," Mary said. "It depends on the circumstances." She continued: "The more stress he's under, the more besieged he feels, the more likely it is that the distance between the telling the lie and believing it is the truth is decreasing. We're getting to the point it's instantaneous."

I pressed her on this point. Does he lie (so much!) as a means to get what he wants and knows this is what he is doing -- or is he delusional? "It's a combination," she said. "Is it just delusion or is it a tactic? I think it might start out as a tactic but it ends up being a delusion because his need to perpetuate a narrative about himself -- a very specific narrative about himself as the winner, as always being right -- is decades old. It's a defense mechanism to protect him against the reality of who he really is...If he had any insight into that, I don't know that he could bear it."

Mary Trump's book is a deep dive into Trump's damaged psyche, and it does ring true -- especially at a time when Americans are watching him botch the response to a pandemic due to his narcissism, ignorance, and lack of compassion. But does her analysis provide an escape route for her uncle -- he's harming the nation because he was harmed as a child? Does this, I asked Mary, absolve Trump? "I can't say this emphatically enough," she replied. "Absolutely not. This was not in any way intended to let him off the hook. He's a responsible -- he's responsible for his actions. He's an adult human being who knows the difference between right and wrong. He just doesn't think it applies to him. But he knows the difference. The point of the analysis of his developmental history was in its explanatory power...Even I feel sympathy for Donald, the 2-and-a-half-year-old. A lot of people who end up being horrible criminals when they are adults had very abusive childhoods. You can have sympathy for that child. It does not at all, under any circumstances, diminish their responsibility for what they do...He does not get a pass. He needs to be held to account. Very seriously held to an account when this nightmare we're living through is over."

David Corn is  Mother Jones ' Washington bureau chief. For more of his stories,  click here . He's also  on  Twitter  and  Facebook .  RSS  |  TWITTER  David is (more...)
Related Topic(s): Coronavirus; Family; Mary Trump Book; Trump Broken Promises; Trump Cruelty; Trump Presidency; Trump Racist, Add Tags
Add to My Group(s)
Go To Commenting
The views expressed herein are the sole responsibility of the author and do not necessarily reflect those of this website or its editors.