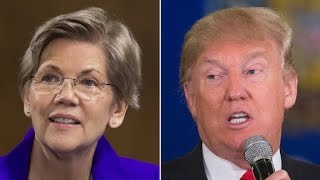 Donald Trump is still obsessed with the idea that he can shut me up. He really should know better by now.

He ranted about me at another rally last night, just days after his PR team used the official @WhiteHouse twitter account to attack me too (I was visiting our troops in Iraq and Kuwait at the time, so I missed the whole thing).

That's fine -- I can handle a bully. But here's the really creepy part: In the same breath, he mocked the entire #MeToo movement. He mocked women who are bravely coming forward and saying that they've been harassed and abused by guys just like Donald Trump.

Donald Trump isn't just trying to scare me -- he's trying to bully all women and make us all shut up. He still doesn't think guys like him should be held accountable for what they say or do.

You know what, Donald? You don't scare us. Women fight back. Women vote, organize marches, knock on doors, make phone calls, run for office -- and win. We'll sweep your Republican enablers out of office this November.

I'm running for reelection this year, and I'm fighting to elect some amazing Democratic women candidates up and down the ballot, across the country with me. Women can take back the House, the Senate, and state governments, and women can hold the Trump administration accountable.

Related Topic(s): #metoo; Organize; Trump Attacks Elizabeth Warren; Trump Bully In Chief; Trump Cruelty, Add Tags
Add to My Group(s)
Go To Commenting
The views expressed herein are the sole responsibility of the author and do not necessarily reflect those of this website or its editors.