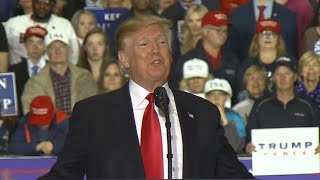 President Trump threatening a shut down of the Federal Government

Each day one wakes up wondering what the latest tweet from Trump will bring.

The latest has the "Donald" threatening to shut down the federal government again "if Congress does not deliver on Republican demands to crack down on immigration by enforcing security on the border with Mexico and building his long-promised wall." [1]

Then his administration "is considering bypassing Congress to grant a $100 billion tax cut mainly to the wealthy, a legally tenuous maneuver that would cut capital gains taxation and fulfill a long held ambition of many investors and conservatives". [2]

As to Trump's immigration and border wall excesses that's hardly news but shutting down the federal government again if Dems in Congress won't go along with his impetuous folly is just plain crazy. As if the American people-most of them anyway-are going to blame the Democrats for not acceding to Trump and punish them in the November elections is nuts. Other than Trump's base who still genuflect on whatever he does most people want to punish him.

The time the federal government shut down in 2013 local small businesses got hurt, people cancelled plans, trips and hotels and $billions were lost in that folly.

Now his administration is pushing for a new $100 billion tax cut on capital gains to benefit the wealthy, this after his tax reform plan enacted last December cut the corporate tax rate from 35% to 20%, reduced the taxes on the wealthy from 39.6% to 35% and eliminated the estate tax.

But the idea big corporations will expand by paying less taxes and creating new jobs is a fallacy. They're only interested in buying back their own stock, raising the price of the stock thereby raising the dividends paid to share holders as well as rewarding themselves with bonuses and stock holdings.

Of course all the above just adds fuel to the fire against Trump and the Russophobia hysteria over his summit with Russian President Vladimir Putin.

Trump does a good thing having a dialogue with Putin but that positive gets lost among most Dems and progressives because of the multitude of craziness that the "Donald" can't seem to rein in.

That tweet-in all caps yet-to Iranian President Hassan Rouhani blurting out, "NEVER, EVER THREATEN THE UNITED STATES OF AMERICA OR YOU WILL SUFFER THE CONSEQUENCES THE LIKES OF WHICH FEW THROUGHOUT HISTORY HAVE VER SUFFERED BEFORE. WE ARE NO LONGER A COUNTRY THAT WILL STAND FOR YOUR DEMENTED WORDS OF VIOLENCE AND DEATH BE CAUTIOUS," was just over the top threatening rhetoric we've come to expect from him.

Threats, provocations, sanctions, then in between come summits with North Korean leader Kim Joug-Un and weeks later with Putin. It's a whirlwind of unpredictability. But it also serves as the perfect distraction keep the pot boiling and deflecting attention away from the military/industrial, political/ surveillance/security complex whose tentacles reach deep into every institution in America.

As said before in this space we Americans haven't been vigilant and skeptical of what our government does. The last time we were vigilant we forced a sitting president, Lyndon Baines Johnson from running for re-election. The protests and demonstrations we had against the Vietnam war along with Daniel Ellsberg's leaking of the Pentagon Papers revealed the heinous history of US political and military involvement in Vietnam from 1945 to 1967.

Today we have demonstrations by groups with their own agendas, against Trump, Me Too, the sexual abuse allegations against film producer Harvey Weinstein. Then there's Black Lives Matter protests, against fracking, the $15 dollar minimum wage, climate change, anti-war, Citizens United, et al. But they're all separate and distinct from each other and not unified. Imagine if these groups became unified in a coalition merging their separate issues into a larger one and focused on taking on the unelected ruling elites who are behind all the significant problems and issues we face in this country. It would be revolutionary. Because we don't have a country of, by and for the people. It's of, by and for the ruling elites.

It's more than Trump. He's just the latest to be elected president in an electoral system completely corrupted by big money that serves those he now wants to give a $100 billion tax cut. The gas pipeline and fracking interests are not small businesses repairing shoes or dry cleaning establishments. They're big business, funded by the big banks interconnected to the state and local governments whose elected officials are beholden to those big business interests. By allowing fracking in their jurisdictions they're certainly not representing the people's interests.

Retired. The author of "DECEIT AND EXCESS IN AMERICA, HOW THE MONEYED INTERESTS HAVE STOLEN AMERICA AND HOW WE CAN GET IT BACK", Authorhouse, 2009
Related Topic(s): Immigration; Provocation; Sanctions; Trump Anger; Trump Insults; Trump Threats, Add Tags
Add to My Group(s)
Go To Commenting
The views expressed herein are the sole responsibility of the author and do not necessarily reflect those of this website or its editors.