Demonizing the "other," conflicting a crisis to entrench power and using cruelty to spread fear are all part of an assault on democracy 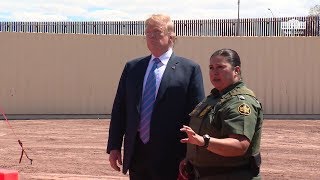 The first rule in the dictator's playbook is to fuel public anger against the "other" people said to be dangerous outsiders.

From the start of his campaign for president, Donald Trump has sought to make immigrants from Mexico and Latin America the nation's nemesis.

The second rule in the playbook is to conjure up a so-called "crisis" of containing the outsiders.

Undocumented immigration into the United States dropped in 2017, but began to rise last year. March brought more than 92,000 apprehensions at the southwest border, the highest number reported in one month in a decade, according to the Department of Homeland Security.

But this is no crisis. It's not a threat to national security. (Last November, a federal judge blocked the Trump administration's attempts to ban Central Americans from seeking asylum on national security grounds.)

America is hardly "full," as Trump has said. In fact, our aging population needs young immigrants to take up the slack.

Whatever problem this surge of migrants poses isn't nearly the magnitude of threats like climate change, nuclear proliferation, or the undermining of democratic institutions all of which, not incidentally, Trump has worsened.

The immediate problem is humanitarian. The surge is largely asylum-seeking families from Central America who have a right to have their claims heard by an immigration judge.

But because America doesn't have enough immigration judges to make such decisions, families are being detained at the border. Even the Republican senator Ted Cruz proposes adding hundreds more such judges to clear the backlog.

Yet Trump has no intention of remedying the humanitarian problem. He wants a crisis to stir up his base and show how tough he is.

Which brings us to the third rule in the dictator's playbook: use the trumped-up crisis to enlarge and entrench power.

When he's not accusing Democrats of being socialists, Trump is rallying his followers around the supposed mob at the gates. At a campaign rally in Grand Rapids, Michigan, he claimed migrants are coached by lawyers to say "I'm very afraid for my life" although they look as strong as "the heavyweight champion of the world."

This flies in the face of the recent warning by the former Homeland Security chief Kirstjen Nielsen that migrants including children -- two of whom have died in federal custody -- are arriving "sicker than ever before."

Related Topic(s): Cruelty; Immigration; Power; Trump Border Wall; Trump Bully In Chief, Add Tags
Add to My Group(s)
Go To Commenting
The views expressed herein are the sole responsibility of the author and do not necessarily reflect those of this website or its editors.