By Bernie Sanders and Rashida Tlaib

Republicans defend cuts to food stamps by saying that keeping people hungry will make them work harder. But we know this is just about cruelty 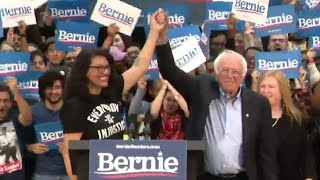 When it comes to billionaires benefiting from the generosity of the American taxpayer, the holiday spirit is alive year-round. Taxpayers paid out $115m to Donald Trump so he could play golf at his own resorts.

And Amazon didn't just pay zero in federal taxes on $11bn in profits taxpayers gifted the corporation $129,000,000 in rebates. That's enough to pay for CEO Jeff Bezos's three apartments in Manhattan, including a penthouse, that cost him $80m.

And what about government generosity for those who actually need help? Tax dollars are somehow much harder to come by when they're not going to handouts for the rich. The average person in poverty, struggling to put food on the table, gets about $134 a month in nutrition assistance.

Now, just in time for the holidays, Trump has finalized the first of three policies that will make this disparity even more obscene. Two years after passing a $1.5tn tax giveaway to the wealthiest Americans and large corporations, the Trumpadministration plans to strip 3.7 million people of their nutrition benefits.

The administration's first step is to kick 700,000 adults off of nutrition assistance as they struggle to find work. The second step: trying to punish families who have high childcare and housing costs. And third, they want to hurt families who already are making difficult choices between food or heat.

And we should also lift the onerous conditions on what people can buy with nutrition assistance. One Vermonter shared how, in the cold winter months, she wished she could buy her children a hot-roasted chicken from the store, because she had no access to an oven. Under the current program, she can only buy the day-old cold roasted chicken. Multiple Michigan families have similar stories to share. These are the kinds of requirements that force poor people to jump through humiliating hoops but they accomplish nothing in the fight to end hunger.

Related Topic(s): Food; Needy; Poverty; Taxes; Trump Against Democracy, Add Tags
Add to My Group(s)
Go To Commenting
The views expressed herein are the sole responsibility of the author and do not necessarily reflect those of this website or its editors.