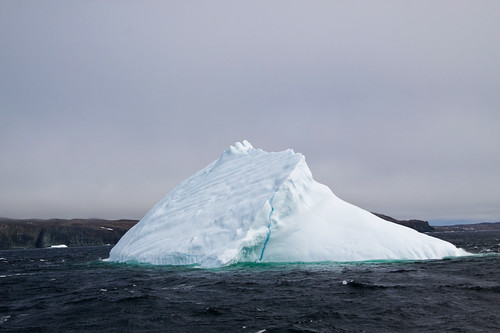 Iceberg in Newfoundland Canada
(Image by natalielucier)   Details   DMCA
Michael Flynn, who was found lying not only to VP Pence but to the government about payments from Russia, is now out of power and under investigation, and Manafort, Trump's former campaign manager, also fired, is under investigation for lying about secret payments from pro-Russian parties. The argument that the links between the Trump organization and ties to Russia being "Democratic propaganda" has collapsed.

One need not support Clinton to understand that many Trump associates, at the highest levels, had ties with Russian or pro-Russian links, during the campaign and several received hefty payments which they then lied about. Nor that Trump himself lied about having "no ties" to Russia.

When people lie, they are covering up the truth. What is the truth? Those who have argued, all too many on the progressive side even after Trump said of the hacking, after intelligence showed him the evidence, "I think the Russians did it." Those proposing we keep an open mind and look at the facts, and wait for the evidence, have been vindicated by the fact that Trump has had to fire both his NSA chief and his chief campaign manager, not due to unwarranted accusations by the left, but by evidence of lying about their ties, including financial to Russian and pro-Russian parties.

Was here a financial bias for Trump's friendly gestures to Russia. According to his son a few years back, a good part of the Trump inventory is based on assets and financial backing from Russia. Trump openly asked for Russia to help him defeat Clinton Wikileaks, which Assange in his interview with Megyn Kelly on Fox News admitted had material on both Trump and Clinton, released the damaging material on Clinton but is keeping what it has on Trump secret. That is bizarre behavior for an organization committed to exposing secrets, in this case about the President of the United States.

And now Flynn appears to have broken the law and have kept secret his payments from Russia. The investigation into what he was covering up may be just the tip of the iceberg of clandestine relations between the Trump organization and Russian parties.

It has now been proven that Mantafort lies about receiving money from the pro-Russian Ukraine government to provide propaganda in the US and favorable political connections.

"Manafort, who worked as a political strategist for Yanukovych, was Trump's campaign manager until August. He resigned after Kiev investigators accused him of accepting $12.7 million in secret payments. Manafort's name appeared in what is known as the "black ledger," a record of payments from an illegal slush fund Yanukovych's Kremlin-friendly party, the Party of Regions, operated out of several offshore bank accounts. The National Anti-Corruption Bureau of Ukraine, a government law enforcement agency, released the ledger in August as part of an ongoing investigation into corruption charges against Yanukovych." LATimes/March 21

The information that exposed Mantafort as lying about the payments, ironically (given that Wikileaks exposed Clinton material to help Trump) from hackers: "The text messages were part of a large cache released by a hacker group in February that reportedly came from the iPhone of Paul Manafort's daughter, Andrea."

The Washington Post reported on March 21, "The latest documents were released just hours after the House Intelligence Committee questioned FBI Director James B. Comey about possible coordination between the Trump campaign and Moscow."

Then Salon reported on April 12: "In August, Manafort denied ever receiving payments from the Russian or Ukranian government, and said that the suggestion he had accepted cash payments was "unfounded, silly and nonsensical." Now, the AP has obtained financial records that show that at least $1.2 million in payments that were listed in the ledger next to Manafort's name were indeed received by his consulting firm in the United States. The payments came in 2007 and 2009 and provide the first evidence that support the credibility of the black ledger."

That which is "unfounded, silly, and nonsensical" has now been found to be true.

Flynn, briefly in charge of our National Security, has now been found to have lied about payments from Russia. Fox news (how satisfying to use this mouthpiece of the right as a source) reported: "Michael Flynn, President Donald Trump's former national security adviser, did not reveal payments he received from three Russia-connected entities on a financial disclosure form he filed upon joining the Trump administration.