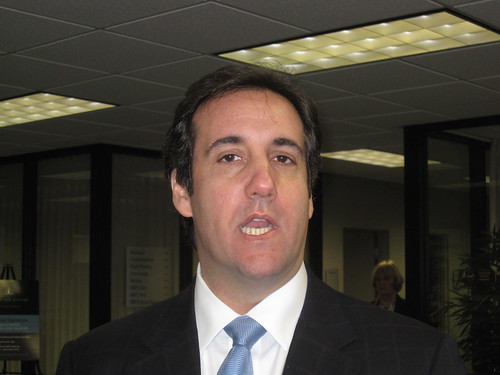 If Donald Trump's longtime personal lawyer Michael Cohen wasn't feeling the heat already, he's about to enter an inferno. Not only did Trump assign him sole responsibility Thursday for the Stormy Daniels imbroglio, but new reporting suggested that special counsel Robert Mueller is zeroing in on Cohen as a lynchpin in the Russia probe. We'll get back to that in a second.

As we close out the week, here's a parting thought to keep in mind: Cohen, a Trump loyalist for about a decade and executor of some of his seediest deals, is now under extraordinary pressure. Cohen, sometimes called "Trump's pitbull," knows where the bodies are buried, so to speak. And now Stormy Daniels' lawyer Michael Avenatti will be hounding him on one Trump pressure point while Team Mueller dogs him on the other. As Avenatti pointed out Thursday:

"More and more eggs are being placed in the Michael Cohen basket. And if this guy doesn't hold up ultimately, whether it's in connection with this case or with Robert Mueller, Katy bar the door -- very bad things are going to happen to this administration."

In short, Cohen's loyalty to Trump is about to undergo a whipsaw stress test. On the Stormy side, here's a rundown of his potential legal troubles, which include fraud, disbarment, and making an illegal campaign contribution.

On the Russia front, McClatchy News reported Friday that Mueller was showing a keen interest in Cohen's dealings with Russian e'migre' and one-time Trump Organization associate Felix Sater. The two worked together on trying to pound out a Trump Tower deal in Moscow at the same time that Trump was running for president.

"The two men have said they teamed with a Russian group called I.C. Expert Consulting, and Cohen last year provided a detailed letter to congressional investigators about the deal and why it did not come to fruition. Appearing on MSNBC last month, Sater said that the local developer had sought financing from the Russian bank VTB, a big lender in Russia but one sanctioned by the U.S. Treasury Department in September 2014, with its subsidiaries added to the list the following year.

"Sater is cooperating with Mueller's investigation and provided more than six hours of closed-door testimony on Wednesday to the Senate Intelligence Committee, which also focused heavily on the deals involving Cohen, according to multiple people with knowledge of the hearing. Sater previously provided similar closed-door testimony to the House Intelligence Committee in December 2017."

Let's just say, there's a lot of meat on that bone. And if Mueller finds any legal improprieties, he will surely leverage every bit of that weight to flip Cohen. To a large extent, Trump's fate now lies at least partially in the hands of Cohen. Will he go the way of Michael Flynn or Paul Manafort?

Related Topic(s): Michael Cohen; Mueller Investigation; Testify; Trump Crime; Trump Illegality; Trump Russia Connection, Add Tags
Add to My Group(s)
Go To Commenting
The views expressed herein are the sole responsibility of the author and do not necessarily reflect those of this website or its editors.