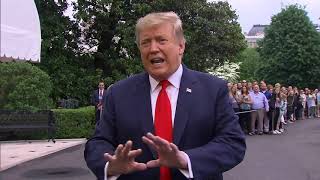 Making no effort to hide an unprecedented attempt to thwart criminal investigations into Donald Trump, as well as stymieing congressional oversight of a laundry list of wrongdoings, the White House has launched a new and dangerous era in American politics. Today, the corruption and contempt for transparency is out in the open, with united Republicans flaunting their radical ways. This creates a whole new challenge for Beltway journalists, who for generations have been trained to uncover scandals and root out wrongdoing done in private. But how does a press corps deal with a Trump team that doesn't even bother to hide the ugly stuff?

The new phenomenon was on stark display last week as Attorney General William Barr, testifying before Congress, honed his role as Trump's personal defender while doing everything possible to muddy the waters surrounding independent counsel Robert Mueller's Russia investigation. After releasing a wildly misleading four-page "summary" of Mueller's report in March, Barr then purposefully misled Congress about whether Mueller disagreed with Barr's assessment. Incredibly, Barr claimed that Trump was within his rights to fire an independent counsel if Trump felt aggrieved -- or if he thought an investigation was unfair or too political. That was soon followed by the announcement that Barr's Department of Justice was refusing to release the unredacted Mueller report to members of Congress.

It's part of a much larger trend. Last week Trump, his family, and the Trump Organization filed a lawsuit against Deutsche Bank and Capital One, demanding that they not comply with congressional subpoenas seeking the Trumps' banking and financial records. Earlier in April, Trump's lawyers filed a similar suit in Washington, D.C., to prevent his accounting firm, Mazars USA, from responding to a different subpoena. And Trump's Treasury Department recently defied a deadline to turn over his tax records to a House committee, which may soon ignite another legal battle.

In terms of refusing to comply with subpoenas, Trump has little legal ground to stand on, and the moves seem to be more of an effort to slow-walk the conflicts indefinitely. "Judges have repeatedly affirmed the power of Congress to investigate a wide array of matters and to issue subpoenas," The Wall Street Journal reports. "But the litigation could easily take years, according to legal experts."

Related Topic(s): Dangerous; Republican; Transparency; Trump Dossier; Trump Presidency; Trump Untrustworthy, Add Tags
Add to My Group(s)
Go To Commenting
The views expressed herein are the sole responsibility of the author and do not necessarily reflect those of this website or its editors.