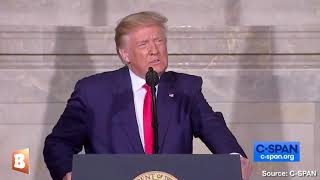 Yesterday the orange haired one struck again. Trump announced what he called the "1776 Commission" an initiative to counter what he says is, "The left wing rioting and mayhem" which "are the direct result of decades of left-wing indoctrination in our schools".

He specifically named the "1619 project" and Howard Zinn's, "Peoples History of the United States". I can't speak about the former but the latter is a well documented and most important analysis of American history ever written. It should be required reading in American schools-if it isn't already.

Whether Trump actually read Zinn's book or just scanned a few pages his open denunciation reveals he certainly doesn't get one of the aims of Zinn, to help enlighten people to the harsh truth of American history. To counter the US history most of us were taught, which was an account that whitewashed the genocide of the indigenous peoples then gave us an oversimplified version of slavery of African peoples. Glossing over how they were brought here in chains, their families broken up, sold off to some slave buyer to legally use and abuse his "purchase" as he pleased-which of course included many ex-presidents.

Whether our ancestors were actually here during those earlier times is irrelevant. We today are the privileged descendents of the people who carried out those nefarious misdeeds. We can't undo what they did but do we need to know the truth clearly and unmistakably. Something Zinn bequeathed to us.

Retired. The author of "DECEIT AND EXCESS IN AMERICA, HOW THE MONEYED INTERESTS HAVE STOLEN AMERICA AND HOW WE CAN GET IT BACK", Authorhouse, 2009
Related Topic(s): Initiative; Schools; Trump; Trump Executive Order; Trump Threats, Add Tags
Add to My Group(s)
Go To Commenting
The views expressed herein are the sole responsibility of the author and do not necessarily reflect those of this website or its editors.