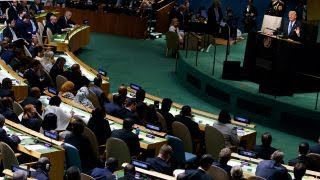 The United Nations General Assembly's annual plenary session has heard a fair share of bizarre speeches by world leaders in the 72-year history of the world organization. U.S. President Donald Trump's speech on September 19, while intemperate and undiplomatic, was not the only rancorous diatribe or the most peculiar oration ever heard within the hall of nations.

Trump referred to Democratic People's Republic of Korea (DPRK) head of state Kim Jong Un as "rocket man" and a person on a "suicide mission" who, along with his nation, would be "totally destroyed" by the United States if the North attacked the United States or its allies. Trump's comments resulted in stone-faced silence from the other world leaders and diplomats gathered inside the General Assembly. At one point in time during Trump's speech, his White House chief of staff, retired General John Kelly, was seen burying his face into his hand. Although most of Trump's venom was directed against North Korea, he also castigated Iran, Cuba, Syria, and Venezuela. The baring of Trump's fangs toward the five countries is in keeping with the neoconservative foreign policy drift of his administration. Iranian President Hassan Rouhani, in New York for the General Assembly session, succinctly characterized Trump's speech as "ignorant, absurd and hateful rhetoric."

The only world leader who beamed during Trump's speech was Trump's ideological doppelganger, Israeli Prime Minister Binyamin Netanyahu. The scandal-plagued Israeli leader is no stranger to berating other countries before the General Assembly. In 2012, Netanyahu displayed before the General Assembly a cartoonish bomb with a lit fuse. The "Bibi Bomb," which was meant to convey false intelligence on Iran's alleged 90 percent nuclear weapons uranium enrichment, became the target of jokes and derision. Undeterred by his past use of the General Assembly's podium for cheap publicity stunts, in 2016, Netanyahu publicly berated Palestinian President Mahmoud Abbas, who had spoken just before him. Trump and Netanyahu have made no secret of their disdain for the UN. In Trump, Netanyahu has found a boorish comrade-in-arms. It was also no coincidence that Trumps' speech was largely the product of his pro-Likud speechwriter, the Jewish white supremacist Stephen Miller.

Trump, who has made no secret of his racial preference for white Europeans, received no applause from an overwhelming majority of the General Assembly delegates, most of whom were from the non-white countries of Africa, Asia, Latin America, the Middle East, the Caribbean, and the South Pacific. The day following Trump's UN speech, he embarrassingly told a luncheon of African leaders, "I have so many friends going to your countries trying to get rich." Those Trump "friends" include expatriate billionaire oligarchs living in Israel, Britain, and other countries who are viciously exploiting Africa's natural resources, including diamonds, gold, platinum, oil, and rare earth minerals. Some of these brigands who are robbing Africa blind are business associates of Trump son-in-law Kushner and his family.

Trump also showed his total ignorance of Africa when referring to a health crisis in the non-existent country of "Nambia." It was never made clear by Trump's unimpressive foreign policy team whether he meant Zambia or Namibia, or possibly, Gambia.

In 2006, Venezuela's President Hugo Chavez had many of the General Assembly delegates laughing and applauding as he referred to the speech that U.S. President George W. Bush gave the day before. Chavez said, "The devil came here yesterday, and it smells of sulfur still today, this table that I am now standing in front of." Chavez continued, "Yesterday, ladies and gentlemen, from this rostrum, the President of the United States, the gentleman to whom I refer as the devil, came here, talking as if he owned the world... the American empire is doing all it can to consolidate its system of domination. And we cannot allow them to do that. We cannot allow world dictatorship to be consolidated." Chavez's speech was immensely popular among many of the General Assembly delegates from nations that had suffered from dictates from Washington over the years.

Trump's speech made many Americans feel ashamed of his administration. On the other hand, Chavez's speech was met with overwhelming support at home in Venezuela, with many of Chavez's fellow citizens saying he made them proud to be Venezuelan.

In 2009, Libyan leader Muammar Qaddafi gave a 100-minute speech to the General Assembly, the Libyan head of state's only address before the UN. Qaddafi's speech was called "rambling" by the corporate media. However, Qaddafi hit on many salient and historical points, including the UN Security Council's authorization of 65 wars since its creation, whether swine flu had been created in a biological warfare laboratory and if President John F. Kennedy had been assassinated in a wide-ranging conspiracy, and the illegality of the 1983 U.S. invasion of Grenada.

Qaddafi's speech, although long, was met with applause from the delegates from the developing world, diplomats who longed to hear a world leader come down hard on the imperialist and colonialist countries of Europe and North America. Qaddafi, who wanted to stay in his Bedouin tent while in New York, was forced to take it down from the only property that would allow it -- the lawn of the Westchester, New York estate of Donald Trump. County zoning officials eventually forced Qaddafi to remove his tent from Trump's property because "temporary strictures" were banned by county ordinance.

When a leader like Chavez or Qaddafi or Cuban leader Fidel Castro, who spoke in 1960 for four-and-a-half hours, had something truthful and hard-hitting to tell the General Assembly, most of the delegates listened attentively. Trump, who had nothing meaningful to say, was received more like a circus act by the General Assembly than a serious world leader. Even Indian diplomat V.K. Krishna Menon, who spoke to the General Assembly in 1957 for almost eight hours on the subject of Kashmir, had more important things to say than did Trump for 41 minutes. The UN asks world leaders to speak for no longer than 15 minutes, however, few adhere to that rule.

In 1975, Ugandan "President-for-Life" and Field Marshal Idi Amin Dada spoke to the General Assembly in the Ugandan tribal language of Luganda and not in English, a language in which he was fluent. Since the UN had no Luganda interpreter, Amin ordered his UN ambassador to translate his speech into English, from which the UN French, Russian, and Chinese interpreters had to hastily provide instantaneous translation. At a side interview at the UN, Amin likened British Prime Minister Edward Heath to Adolf Hitler.

In 1970, the dictator of the Central African Republic, General Jean-Bedel Bokassa, who later proclaimed himself emperor and was accused of practicing cannibalism, told the General Assembly that there was a "gap between a super-industrialized world, 'well fed' and satisfied, and a world where 'hunger,' sickness, ignorance, deprivation, and wretchedness are the daily lot of hundreds of millions of human beings."

While some political analysts have likened Trump to the bombastic former Italian prime minister Silvio Berlusconi, there is no comparison between Berlusconi's UN speech in 2009 and Trump's speech this year. Berlusconi sounded like a seasoned statesman, compared to Trump. Berlusconi, whose mad-cap public comments and unconventional lifestyle fueled many jokes, urged the UN to respect the roles of the G8 (which then included Russia), the G20, and a reformed UN Security Council.

Trump's odd speech will likely go down in history with other weird moments in the history of the UN General Assembly's plenary session. They would include the October 12, 1978 speech by Grenada's Prime Minister Eric Gairy, in which he spoke about the UN investigating areas "sufficiently important and significant to merit our constant articulation and review of them . . . the Bermuda Triangle, unidentified flying objects, and extraterrestrial phenomena." The General Assembly would not be hearing about extraterrestrials again until 1987, when none other than President Ronald Reagan told the assembled delegates: "Perhaps we need some outside universal threat to make us recognize this common bond. I occasionally think how quickly our differences worldwide would vanish if we were facing an alien threat from outside this world."

Keeping in mind that terrorists, cannibals, UFO enthusiasts, and various ne'er-do-wells have addressed the General Assembly, Trump was not the worst leader to stand at the rostrum of the assembly hall. However, he does hold a high rank among them.

DC pundit
Related Topic(s): History; Israel; Speeches; Trump Insults; Trump Un Speech, Add Tags
Add to My Group(s)
Go To Commenting
The views expressed herein are the sole responsibility of the author and do not necessarily reflect those of this website or its editors.

Trump's Was One of the Most Bizarre UN Speeches in History