President Donald J. Trump's decision to schedule a campaign rally in Tulsa, Oklahoma - the site of one of the worst incidents of mass white racist violence in American history - is yet another 'Dog Whistle' to bigots in his base.

Trump's latest 'Dog Whistle' follows the knee-on-neck playbook of the icon of the modern Republican Party - Ronald Reagan - who launched his successful 1980 campaign for the U.S. presidency in Philadelphia, Mississippi, the locale of a brutal racist incident that inspired passage of the federal Civil Rights Act of 1964. 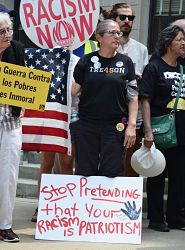 Trump wears prejudice with pride.
(Image by Linn Washington)   Details   DMCA
Thinly disguised bigotry underlies the Trump campaign's selection of Tulsa as the site for the President's first rally in months since the COVID-19 lockdown as surely as bigotry was an operational element in the selection of Mississippi for Reagan's speech that formally launched his general election campaign in August 1980.

In June 1964 racists murdered three civil rights workers then in Mississippi as part of a campaign to register African Americans to vote in the state where decades of systemic discrimination viciously denied blacks their right to vote. Police participated in those racist murders.

Trump and top officials in his administration claim racism is not a core part of policing in America.

That contention defies the historic record of racism within policing.

Prime examples of racism embedded in policing are evident in police participation in the Tulsa massacre and the murders of those civil rights workers whose bodies were buried by killers a few miles from where Reagan delivered that August 1980 speech.