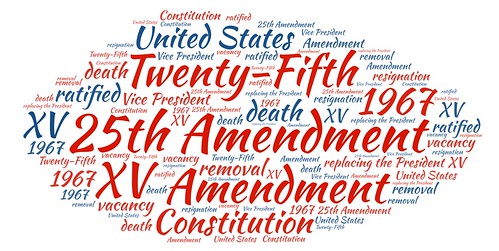 Yet even if the Senate doesn't vote to remove him, he may resign.

It may even be sooner than we think.

Trump's surprise visit to Walter Reed National Military Medical Center this weekend is raising speculation over the possibility the president is crafting a pretext for a hasty departure from 1600 Pennsylvania Avenue.

What is being communicated as a partial physical examination, press secretary Stephanie Grisham's claimed Trump is "healthy" and "without complaints."

Yet Walter Reed staff was not notified of Trump's arrival. Under normal circumstances, it would have ahead of time received instructions about a "VIP" visit.

Grisham said in a statement:

"The President remains healthy and energetic without complaints, as demonstrated by his repeated vigorous rally performances in front of thousands of Americans several times a week."

None other than conservative pundit Cheri Jacobus suggested the impromptu trip was not just part of an exit strategy--it was angling for a potential pardon.

"[Trump is] getting his annual physical three months early is so he can quickly resign for alleged 'health reasons' now that he's guilty as hell and has nowhere left to run and hide."

" Trump's annual physical isn't until February but he's going in now for 'portions' of it? He just needs a an excuse in case he needs to resign and get a 'compassion' pardon from Pence...His excuse to resign as the evidence piles up. Get his compassion pardon."

Presidents have not traditionally traveled secretly to Walter Reed for routine tests that can be performed at the White House.

Considering the administration's mendacious history concerning Trump's health, it may be plausible Trump is ill, or at least wants to portray the illusion he is.

Related Topic(s): Health; Impeachment; Medical; Resignation; Trump, Add Tags
Add to My Group(s)
Go To Commenting
The views expressed herein are the sole responsibility of the author and do not necessarily reflect those of this website or its editors.