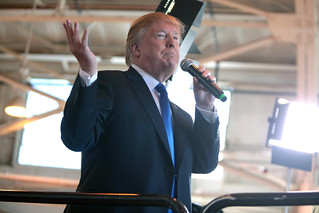 When, Donald J. Trump, the Republican Party's presumptive frontrunner in the 2016 Presidential Elections, won the recent primary contest in Indiana, America and the world faced the prospect of a bombastic, triumphalist speech from this native New Yorker. We braced for prime time lesson from "The Donald." I mentally started to recite a soliloquy from William Shakespeare's Macbeth about "a story told by an idiot, full of noise and emotional disturbance but devoid of meaning."

Oh well. Lets hear what he has to say in victory. I flipped my TV switch to CNN. Flanked by an almost all-white phalange of beaming supporters, Mr. Trump and his family approached the podium emblazoned with: "TRUMP -- Make America Great Again." After grinning like the proverbial Cheshire Cat, he launched into his political spiel.

"Tonight we had a tremendous victory" (applause and cheers). "We have to know how to win, we lose all the time. But trust me we're not going to lose again, we're going to win big." Aha! Take that you political pundits! Go analyze that! From the start The Donald is losing me I have a very hard time following the illogic (what Trump says as public utterances cannot be called speeches in the traditional sense of the word speech and how they are constructed).

"They [ran] 60,000 negative ads, by the way, most absolutely false and disgusting"but people are smart, so smart, they saw through the ads"tremendous amounts of money was spent"$8 million against me"we spent $750,000." (more "tremendous" applause and cheers.). See what I mean? He started by talking about a "tremendous" victory and suddenly we're into campaign advertising, spending and the cognitive ability of the people. All without missing a beat!

"We're going to get those coal minors back to work in West Virginia"in Pennsylvania"they'll be proud to be minors again. Its tremendous." Huh? Where in Sam Hill did that one come from? Oh, yes he was "reaching out" to those states that supported him and hailing out some of the voters. But Mr. Trump was not finished -- not by a long shot -- infact, he was just getting fired up.

Next up? Ted Cruz who "suspended his presidential campaign" after a crushing defeat in Indiana. Why do presidential candidates say that all the time? Suspend means "temporarily prevent from continuing or being in force or effect." The operative word is "temporarily" as in not doing what you do for a brief moment with the hope of resumption and continuing. It does not mean END.

You, Cruz and company, what you have done is to end, permanently stop, shut down, liquidate, abandon and dismantle your campaigns. It's going nowhere. It's the end of the line. It's Over. The end. Finito. So, please stop with the "suspend" jargon as if you're going to restart the thing. Even if (or when) you decide to run in the future the campaign organization at that time will be largely a new one with a few old elements added in for sure. But a new one all the same.

"Ted (Cruz) is one hell of a competitor"I don't know if he likes me or not"but he's one tough competitor. He's an incredible man"just like Ben Carson," Mr. Trump stated. NEWS FLASH! No Donald, Ted Cruz hates your guts. Do you think he's going to kiss your derriere and make up after you attacked his wife and on the day of the Indiana primary obliquely accused his father of being in league with Lee Harvey Oswald the guy who assassinated President Robert Kennedy? If you think he likes you then you're more delusional and certifiable than I thought.

"We're going to win big; we're not going to lose"that's not going to happen," Trump thundered. Oh, brother! I'm sure that people listening to him at his campaign headquarters were silently cringing and thinking: "what a moron, what a zany, what a dolt"aahhh! Why am I always surrounded by nuts and dolts and dunderheads?" Of course, many would have been so conditioned to hear The Donald that they would have learned how to "tune out" his rantings and robotically smile on cue, nod their heads and cheer with the enthusiasm of the religiously converted.

By now I'm biting my nails uncontrollably and looking at the TV as if it's now a demonic manifestation that is likely to jump into my living room. I'm now giggling like a candidate for the loony bin, wide-eyed and hallucinating at this man-who-will-be-president carrying on with facial antics and all. Suddenly, a padded cell like as inviting as a Sealy Certa Mattress!

After 20 minutes of Trump, trumpeting his achievements and ending his "speech" with a few more "tremendous" and "incredible" (limited vocabulary perhaps?) it petered out into nothing but a set of incomplete sentences, phrases and campaign snap shots all distilled into a hard-to-follow Trump Stew.

FOOTNOTE: John Kasich, the last man standing in the GOP race, as bowed out. Donald J. Trump is the Republican Party's presidential nominee for 2016. He'll most likely be facing Hillary Clinton. The match up will pit a political outsider and neophyte against an experienced, insider politician. It will pit two New Yorkers against each other.

Related Topic(s): America; Contest; Cruz; Elections; Oswald; Palin; Race; Republican; Suspended; Trump Campaign; (more...) Veterans, Add Tags  (less...)
Add to My Group(s)
Go To Commenting
The views expressed herein are the sole responsibility of the author and do not necessarily reflect those of this website or its editors.