This article was published by MarketWatch 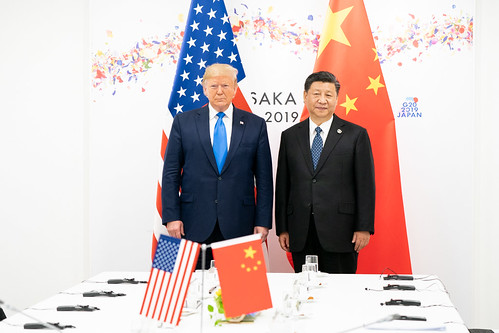 The latest de-escalation of the trade war with China with exemptions from some tariffs on both sides has left markets uncertain as to whether it will end before there is serious escalation. But if I were managing a hedge fund, I would bet on it.

To see why, we must start with Trump himself. Distraction is Trump's modus operandi; this was true for his 2016 campaign and he must have concluded from its success that this was also the best way to govern. Trump's trade wars are therefore best understood as a set of distractions. The end result doesn't matter all that much to him politically, and is therefore not worth that much political risk.

Of course there are things that some of his donors might actually want to win from this fight with China: stricter enforcement of patents to benefit the pharmaceutical giants who also gouge American consumers out of hundreds of billions of dollars annually; or greater access for US bankers to China's financial sector. But Trump's main goal at this point is to get reelected. And the bulk of his big donors including the biggest contributors to the Republican Party " don't want this fight to drag on.

Who else does Trump care about? Trump is practically unique among political leaders in the world in that, among the electorate, he has directed his energies almost exclusively at his hardcore base. Even most dictators will generally try to expand their base by reaching out to people outside of it in their speeches and actions. But Trump has not; possibly because he has been concerned about the threat of impeachment. His hard-core base has been seen as the main force that keeps Republicans especially the 20 of 53 Senate Republicans needed to convict him if he were impeached from betraying him.

Even now, with the House having initiated an impeachment inquiry, it appears that this base is what Trump and his allies are counting on to protect him and get him reelected.

And Trump's base does not care all that much about his fight with China. If he makes a deal and declares victory without gaining anything significant, as happened e.g., with Mexico and the European Union there is little reason to suspect that he would get any more trouble from his base than he got in those episodes. Especially since he is not even fighting for things that might benefit them. If he succeeds, for example, in getting China to reduce the conditions that it imposes on US firms investing there such as sharing their technology this would only encourage more US corporations to move their production from the US to China.

Finally, there is no sizable political opposition force most importantly Trump's 2020 opponents that is likely to gain significant political advantage by attacking Trump for his failure to "win" anything in this trade war with China.

There is also some political risk for Trump in continuing this trade war. Because of the visible damage it's causing, he could get blamed for various negative economic outcomes that may occur before the presidential election. This could happen because of various events and how they are interpreted. For example, the US stock market is overvalued and could fall sharply at any time; this could be blamed on Trump's trade war, and although the stock market is not the economy far from it it is sometimes treated as such by much of the media.

The actual impact of the trade war on the US economy has been somewhat exaggerated, although there is no doubt that some sectors have been hurt e.g., farmers hit by China's retaliatory tariffs. US goods exports to China are less than 0.6 percent of US GDP, and they have fallen by 18 percent from last year. That adds up to about one-tenth of 1 percent of GDP. There are other costs of the trade war that are more difficult to measure, such as reduced investment and economic activity because of the uncertainty caused by trade wars with unpredictable results. But it is difficult to see this trade war tipping the US economy into recession.

Still, if there is a recession or serious slowdown before the election, Trump's trade war with China will likely increase the blame that he gets for any downturn. The incumbent president is often held responsible (or takes credit when it is good) for the state of the economy.

For all of these reasons and more, it's likely that Trump is preparing to end this distraction and move on to the next one. We can only hope that it's not something more violent and destructive, such as an actual shooting war.

Related Topic(s): China; Tariffs; Trade; Trade Barriers; Trump, Add Tags
Add to My Group(s)
Go To Commenting
The views expressed herein are the sole responsibility of the author and do not necessarily reflect those of this website or its editors.