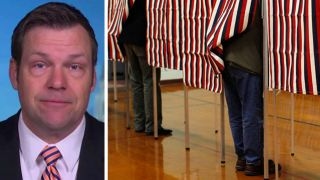 On Tuesday, the trial of the lawsuit by the League of Women Voters against Kobach, Kansas' Republican Secretary of State, began in a Wichita courtroom. The League has sued to block the state's law, drafted by Kobach, requiring all new voters to show proof of citizenship.

Kobach's law has blocked an astonishing one in seven new registrants from voting in the state because they did not satisfy his citizenship paperwork requirement.

The ACLU, which represents the League, has sent in its top litigators, led by its voting rights director Dale Ho, because of the nationwide implications of the case. If Kobach's law is upheld and spreads to other GOP controlled states, just over one million Americans could lose their right to vote by 2020.

Oddly, Kobach has chosen a lawyer with little courtroom knowledge -- himself.

Judge Julie Robinson was not amused by what many see as a publicity stunt. Robinson, the chief justice of the federal district for Kansas, excoriated Kobach for not knowing "Evidence 101," and curtly coached Kobach's amateur team on the correct procedure for cross-examination.

Buffoonish antics in the courtroom drew some laughter. But the partisan result of Kobach's law is deadly serious. According to the ACLU's expert witness, University of Florida professor Michael McDonald, nearly half (44.6%) of the voters blocked are young, 18 to 29 years old.

It cannot be lost on Kobach, former Chairman of the Kansas GOP, that young Americans voted overwhelmingly Democratic, 55% for Clinton and only 36% for Trump in 2016.

To justify the paper proof-of-citizenship requirement, Kobach told the court the requirement has blocked 30,000 non-citizens from voting in Kansas. However, he has been unable to prove that even a single one of the 35,314 voters blocked by the law is an alien.

Just after the 2016 election, Secretary Kobach called me to confirm he was the source of Donald Trump's claim that a million aliens voted in the 2016 election. (Kobach also confirmed it was his idea to force Mexico to pay for Trump's border wall.)

Noting to Kobach that he is the nation's only Secretary of State with the power to prosecute illegal voters, I asked if he planned mass arrests of alien voters. (Kobach had claimed on Fox News, for example, that "50 Somalians are stealing my vote!")

Greg Palast's investigative reports appear in Rolling Stone, the Guardian and on BBC Television. His latest film, The Best Democracy Money Can Buy, on how Donald Trump stole the 2016 election, is available on Amazon. Palast is Patron of the Trinity (more...)
Related Topic(s): ACLU; Court Challenge; Illegals; Kansas; Kris Kobach; Vote Suppression; Voting, Add Tags
Add to My Group(s)
Go To Commenting
The views expressed herein are the sole responsibility of the author and do not necessarily reflect those of this website or its editors.