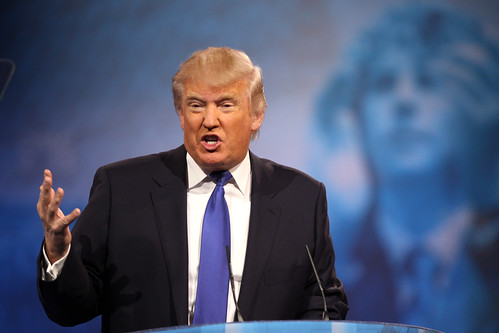 Donald Trump
(Image by Gage Skidmore)   Details   DMCA
>
Mitt Romney's campaign was felled by his "47%" remark.
Newt Gingrich, resigned from the House after an affair with his intern while married to his second wife.
Sarah Palin's interviews with Katie Couric revealed the utter incompetence that helped her lead the Republican party to an election disaster.
Yet not one of these politicians, nor any other in American history, has combined the lying, incompetence, and mean-spirited bigotry of a Donald Trump.
His transgressions arrive so often -- seemingly on a daily basis -- they form a swirling fog of ugliness, impossible to visualize or characterize in one word or idea.
Any one of the following 25 "qualities" would dis qualify a normal person from ever being President. But Trump is abnormal, at least in America, though perhaps more typical for countries with historically autocratic leanings.
The following "list of shame" is nowhere near complete. The campaign still is young, and Trump too, is relatively young, so the list surely will grow.
But perhaps it might help to clarify the strange and frightening world of Donald Trump:
Psychologically, Trump is a teenager, an unstable bully, quick to anger, slow to admit error, a child who craves only glory, while lacking common sense, compassion, and the will to learn.
He demands we trust him to rest his finger on the nuclear button, but like a recalcitrant child, he belligerently demands that his parents trust him to drink, stay out late and drive the family car.
He has very many characteristics of a banana republic despot, but none for America's highest office.

Related Topic(s): Bigotry; Donald Trump Lies; Experience; Incompetence; Lies, Add Tags
Add to My Group(s)
Go To Commenting
The views expressed herein are the sole responsibility of the author and do not necessarily reflect those of this website or its editors.