Lies and misrepresentation of facts have become the hallmark of American politics in recent years more than ever before. Not just lies of commission by Trump and his crew, but lies of omission by the mainstream media as well. 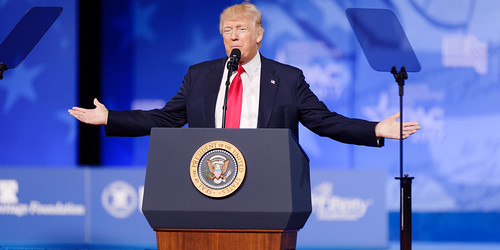 In Trump's recent package of tax cuts for corporations, investors and millionaires, the lie is that the total cuts amount to $1.5 trillion--when the actual amount is more than $5 trillion and likely even higher. And in his most recent announcement of budget deficits the amounts admitted are barely half of the actual deficits--and consequent rise in US national debt--that will occur. Even his $1.5 trillion so-called infrastructure spending plan, that Trump promised during his 2016 election campaign, and then throughout 2017, amounts to only $200 billion. The lies and exaggerations are astounding.

The mainstream media, much of it aligned against Trump, has proven no more accurate in revealing the Trump lies and misrepresentations: They echo Trumps $1.5 trillion total tax cut number and provide no real analysis of the true total of the cuts; they low-ball the true impact of Trump's budget on US annual budget deficits and the national debt; and they fail to expose the actual corporate subsidy nature of Trump's 'smoke and mirrors' infrastructure plan.

Trump's multitrillion dollar tax cuts for business, investors and the wealthiest 1%, plus his annual trillion dollar deficits as far as the eye can see, plus his phony real estate industry handouts that parade as infrastructure spending together will lead the US economy into recession, most likely in early 2019. Here's the scenario:

The massive deficits will require the central bank, the Federal Reserve, to raise short term interest rates. What's called the benchmark federal funds interest rate will rise above 2% (currently 1.5%). The longer term 10 year US Treasury bond rate will rise to 3.5% or more. Those rates have already been rising--and their rise already provoking stock and bond market corrections in recent weeks which should be viewed as 'dress rehearsals' of more serious financial asset market retreats and contractions yet to come.

As this writer has argued repeatedly in recent publications, both the US real economy and financial markets (stocks, junk bonds, derivatives, etc.) are 'fragile' and increasingly susceptible to a significant downturn. In 2007-08 central bank interest rates rose to 5% and that precipitated a crash in subprime mortgage bonds and derivatives that set off the contraction in the economy. With the US economy not fundamentally having recovered from 2008-09 still to this day, and with household and corporate debt well above levels of 2008, it will take less of a rise in interest rates to provoke another similar reaction.

The US real economy is already weak. GDP numbers don't reflect this accurately. Important sectors like autos and housing are softening or even stalling already. Consumption will falter. Consumers have loaded up on household debt. At $13.8 trillion, levels are equal or greater than 2007. They have also been depleting their savings to finance consumption in 2017-18. And despite all the recent media hoopla, there's been no real wage gains occurring for 80% of the workforce in the US. Moreover, renewed inflation now occurring will reduce households' disposable income and buying power even more this year. Rising taxes for tens of millions of households in 2018-19 will also negatively impact consumption spending. Don't expect consumption to rise in 2018 as interest rates, taxes, and prices do. Just the opposite. Consumption makes up 70% of the US economy and it is now nearly exhausted. It will stagnate at best, and even retreat steadily beginning in the second half 2018.

Like the real economy, the US financial markets are fragile as well. They are in bubble territory and investors are getting increasingly edgy and looking for excuses to sell--i.e. take their super capital gains of recent years and run to the sidelines. A rise in rates much above the 2% and 3.5% noted will provoke a significant credit contraction (or even freeze). Money capital (liquidity) will dry up for non-bank companies, investment and production will be scaled back, layoffs will rise rapidly, and consumption will collapse--together bringing the economy down. It's a classic scenario the forces behind which have been steadily building. And it won't take too much more to provoke the next recession--likely in early 2019. The Federal Reserve's plans to hike rates four more times this year will almost certainly set the scenario in motion.

Trump & Congress--with the mainstream media in train--say the Tax Cut Act just passed amounts to $1.5 trillion. But that's not the true total value of the business tax cuts. That's what they claim is the deficit impact of the tax cuts. (But even that deficit impact is grossly underestimated, as will be shown shortly).

Here's the true value of the business-investor tax cuts:

2. Another $.3 trillion for the new 20% tax deduction for non-corporate businesses (lowering their effective tax rate from 37% to 29.6%).

3. $.3 trillion more for ending the business mandate for the Affordable Care Act

4. Still another, at minimum, $.5 trillion for a combined accelerated business depreciation writeoffs (a form of tax cuts for writing off all equipment added by business in the year purchased instead of amortized over several years); plus repeal of the Alternative Minimum Tax for Corporations, a roughly halving of the AMT for individuals, and major reductions to the inheritance tax. But that's not all.

Dr. Jack is an economist, Santa Clara University, and the author of the 2012 book, "Obama's Economy: Recovery for the Few", Pluto press, and host of the weekly radio show, ALternative Visions, on the Progressive Radio Network, PRN.FM. His website is (more...)
Related Topic(s): Budget Deficit; Debt; Economy; Policy; Trump Tax Bill, Add Tags
Add to My Group(s)
Go To Commenting
The views expressed herein are the sole responsibility of the author and do not necessarily reflect those of this website or its editors.