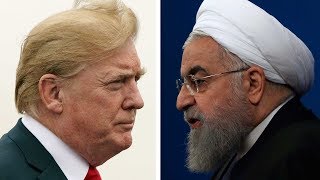 The Trump administration re-imposed tough sanctions on Iran this week, but the move risks further isolating Washington, not Tehran, in the eyes of the world.

President Donald Trump issued a statement to accompany the sweeping sanctions reinstated by Washington. "The Iranian regime faces a choice," he said. "Either change its threatening, destabilizing behavior and reintegrate with the global economy, or continue down a path of economic isolation."

Ironically, the same words uttered by Trump could apply more so to the United States.

This increasingly unhinged US regime needs to back off its "threatening, destabilizing behavior" and begin to respect multilateral rules like other nations. Otherwise, the US and its unilateral bullying is leading to its "continuing down the path of economic isolation."

The American president is in danger of recklessly overplaying his hand. His truculent demands that the rest of the world join in US efforts to isolate Iran economically are likely to backfire badly.

In particular, Trump is reinforcing the historic direction underway by Russia, China and others to shift their international trading relations away from relying on the US dollar as reserve currency. Without that privileged status as reserve currency, the US dollar would tank, and so would the entire American economy, based as it is on endless, unaccountable printing of greenbacks.

Russia, China and India are understood to be not willing to comply with Washington's high-handed demands that they cut business ties with Iran.

Both China and India -- Iran's biggest export markets for its oil industry -- have said they are not going to defer to Trump's sanctions.

The resistance to American diktat is inevitably leading to the rest of the world coming up with new financing mechanisms for conducting trade. That, in turn, is hastening the demise of the US dollar's international status.

Even the European Union this week pushed back against Trump's policy to unduly antagonize Iran by trashing the international nuclear accord.

"We are determined to protect European economic operators engaged in legitimate business with Iran," said the EU's foreign policy chief, Federica Mogherini, in a statement co-signed by the foreign ministers of Britain, France and Germany.

The 28-member EU is introducing a Blocking Statute which will afford legal protection to its commercial ties with Iran from so-called "secondary sanctions" planned by the Trump administration to hit nations continuing to do business with Tehran.

Washington's sanctions reimposed this week are aimed at cutting off Iran's ability to conduct international trade using US dollar payments. But if other nations hold firm to commercial ties with Iran, they will circumvent the American restrictions by necessarily using bilateral currency deals transacted with euro, renminbi, rupee or ruble.

Related Topic(s): Global Financial Crisis; Global Opinion; Iran; Iran Nuclear Deal, Add Tags
Add to My Group(s)
Go To Commenting
The views expressed herein are the sole responsibility of the author and do not necessarily reflect those of this website or its editors.